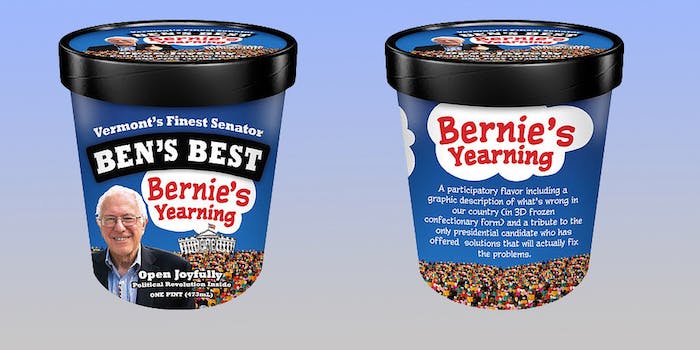 Cool down while feeling the Bern.

There’s a new way to stay cool while feeling the Bern.

“Nothing is so unstoppable as a flavor whose time has finally come,” Cohen wrote on his Facebook page.

Rumors of a Bernie Sanders flavor from Ben & Jerry’s have percolated for months, and the brand’s co-founders floated the idea back in October. Finally, however, the dream of a flavor inspired by the 74-year-old democratic socialist has become a cold reality.

Bernie’s Yearning, as the delectable election treat is named, is not an official flavor of Ben & Jerry’s, which is based in Sanders’ home state of Vermont. Bernie 2016, the Independent Vermont senator’s official presidential campaign, paid to create the flavor; Cohen made the ice cream on volunteered time, according to the ice cream’s website. “Jerry and I have been constituents of Bernie Sanders for the last 30 years,” wrote Cohen on the Bernie’s Yearning site. “We’ve seen him in action and we believe in him. When we’re out  speaking on his behalf people always ask if there’s a Ben and Jerry’s flavor. There’s not. But if I were going to come up with one, this is what it would be.”

If you’re hoping to snag a pint, you face some fierce competition. Cohen only made 40 pints, 25 of which were donated directly to the campaign. You can enter to win one of the 25 pints by entering this contest.

Update 4:43pm CT, March 31: If you live in New York City, you can go grab a free taste of Bernie’s Yearning in Manhattan’s Union Square.

Jerry & I are headed to #NYC — if you've been waiting to try #BerniesYearning swing by Union Square tomorrow at 5p pic.twitter.com/dmMxRIMnE1

Enjoy it while supplies last.