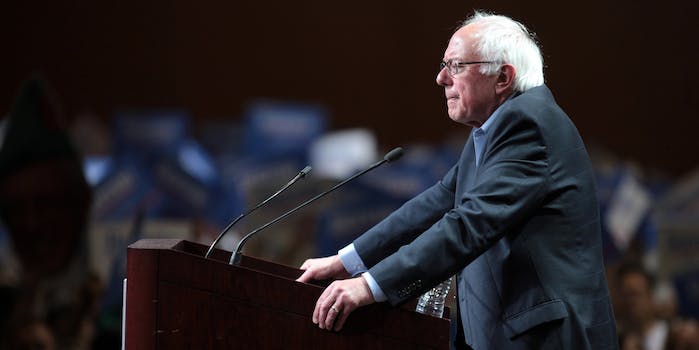 Bernie Sanders is with her.

Bernie Sanders is with her.

In an interview with MSNBC on Friday, the Vermont senator and Democratic presidential candidate vowed to back Hillary Clinton in the general election against Donald Trump. “Yes,” Sanders said when asked whether he would vote for the presumptive Democratic nominee.

JUST IN: @BernieSanders says "yes," he will vote for @HillaryClinton in November https://t.co/6FT0ZLi0JG

“I think the issue right here is, I’m gonna do everything I can to defeat Donald Trump,” Sanders said.

Sanders has remained in the Democratic presidential race despite Clinton surpassing the total number of delegates, including unbound superdelegates, needed to secure the Democratic nomination. Clinton has also won the majority of pledged delegates and received 3.77 million more votes than Sanders.

“I think Trump in so many ways will be a disaster for this country if he were to be elected president,” Sanders said during the MSNBC interview. “We do not need a president whose cornerstone of his campaign is bigotry, is insulting Mexicans and Latinos and Muslims and women, who does not believe in the reality of climate change when virtually every scientist who has studied this issue understands that we have a global crisis. This is not somebody who should become president.”

Sanders’s comments come just days after Trump called on Sanders’s supporters to back him over Clinton. “That’s why we’re asking Bernie Sanders’s voters to join our movement: so together we can fix the system for all Americans,” Trump said. “Importantly, this includes fixing all of our many disastrous trade deals.”

Neither the Clinton campaign nor the Trump campaign immediately responded to requests for comment.