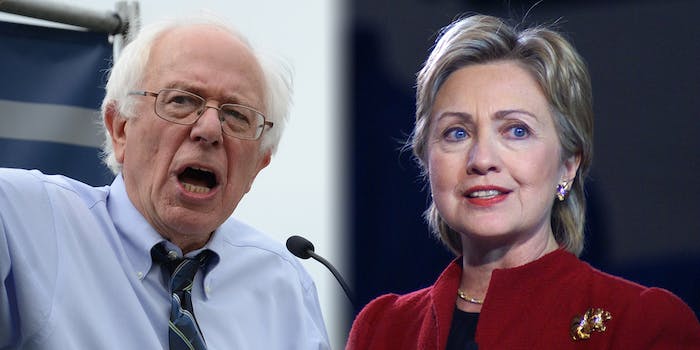 'Hillary Clinton will make an outstanding president and I am proud to stand with her here today.'

The revolution and the establishment have just joined forces.

While celebrating the 22 state contests Sanders won, earning him nearly 1,900 total delegates, the liberal firebrand praised former Secretary of State Clinton for her success and vowed to do “everything I can” to help her beat presumptive Republican nominee Donald Trump in the general election this November.

“I have come here today not to talk about the past but to focus on the future. That future will be shaped more by what happens on November 8 in voting booths across our nation than by any other event in the world,” Sanders said in prepared remarks. “I have come here to make it as clear as possible as to why I am endorsing Hillary Clinton and why she must become our next president.”

Sanders has remained in the race since Clinton secured the support of the delegates needed to lock in the Democratic nomination at the party’s national convention later this month. In doing so, he managed to push a number of his key issues, including a $15 minimum wage and free college education, onto the Democratic Party platform.

Furthering his campaign’s primary message of helping those most affected by income inequality, the U.S. criminal justice system, and the healthcare industry, Sanders touted Clinton as the best path forward for Americans in need.

“This election is about which candidate will nominate Supreme Court justices.”

“While Donald Trump is busy insulting Mexicans, Muslims, women, African Americans and veterans, Hillary Clinton understands that our diversity is one of our greatest strengths,” Sanders said. “Yes. We become stronger when black and white, Latino, Asian American, Native American—all of us—stand together. Yes. We become stronger when men and women, young and old, gay and straight, native born and immigrant fight to rid this country of all forms of bigotry.”

Sanders also warned supporters about what’s at stake for them if Clinton fails to secure the presidency. “If Donald Trump is elected,” Sanders said, “we will see no increase in minimum wage. This election is about which candidate will nominate Supreme Court justices.”

Sanders acknowledged that he and Clinton “disagree on a number of issues,” but cheered the gains his campaign made in shaping the Democrats’ platform. “Our job now is to see that platform implemented by a Democratic Senate, a Democratic House and a Hillary Clinton president—and I am going to do everything I can to make that happen,” Sanders said, speaking to his reporters.

The question now is whether Sanders legion of passionate supporters will make the shift to Clinton’s camp. On the main pro-Sanders Reddit community, r/SandersForPresident, voters pleaded with their candidate to not endorse Clinton, whom they see as an untrustworthy establishment candidate, and vowed to not vote for her even with his endorsement.

Trump quickly capitalized on Sanders endorsement of Clinton, claiming on Twitter that he was “selling out.”

I am somewhat surprised that Bernie Sanders was not true to himself and his supporters. They are not happy that he is selling out!

Sanders firmly rejected this path notion and said he believes Clinton will be an “outstanding president” if she wins on Nov. 8.

“Hillary Clinton will make an outstanding president,” he said, “and I am proud to stand with her here today.”