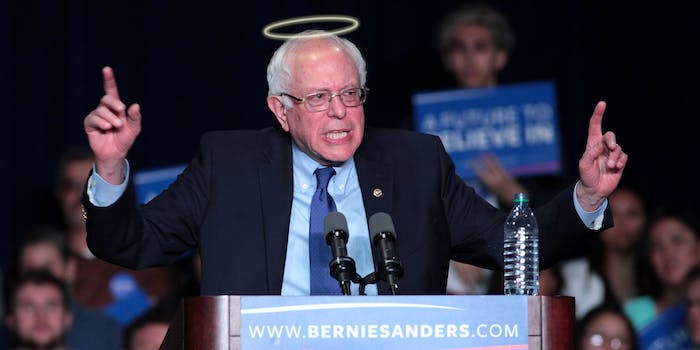 As no God as their witness, atheists are demanding an apology.

Good lord, the DNC email hack sure has people angry.

Late last week, WikiLeaks released a searchable database of nearly 20,000 emails stolen from the Democratic National Committee by a hacker going by the handle Guccifer 2.0. The contents of those emails made a lot of people mad—especially Bernie Sanders supporters who saw evidence of the party leadership systematically favoring the candidacy of former Secretary of State Hillary Clinton over the Vermont senator.

However, there’s another group of Americans angry at the party for a different, albeit related, reason: atheists.

In an email sent in May of this year, DNC CFO Brad Marshall appeared to suggest getting someone—likely a member of the press—to ask someone—who many have speculated is Sanders—directly about their belief in God.

While, in an email to the Intercept, Marshall denied he was talking about Sanders, the description of someone who has “skated on saying he has a Jewish heritage” does seem to resemble Clinton’s main primary opponent, and atheists groups don’t seem to be buying the excuse.

In a statement from the secularism advocacy group Center for Inquiry, the organization’s leadership slammed the DNC for promoting divisiveness and discrimination.

“We found it appalling that anyone within the Democratic National Committee would casually suggest attacking a candidate for their alleged atheism,” the statement reads. “Entertaining such a cynical and bigoted line of attack violates any number of basic American principles: It presumes a religious test for holding office, something expressly prohibited in the Constitution. It pits the majority against a marginalized minority group, intensifying the country’s already escalating divisions. It exacerbates the gross stereotype of atheists as second-class citizens or somehow less moral than believers, a stereotype atheists have been tirelessly battling for generations.”

“Perhaps most importantly,” the statement continued, “it sends the unmistakable signal to atheist Americans that despite all of our hard-won progress for equal treatment, atheists are still not welcome, not ‘one of us,’ not American.”

That a candidate’s political opponents would be interested in uncovering their lack of a belief in God isn’t particularly surprising. Polls have consistently shown that many Americans aren’t willing to put their faith in a candidate without faith in a higher power. A survey conducted by Gallup last year found that 40 percent of Americans would not vote for an atheist candidate nominated by their political party who was otherwise well qualified for office.

The only group to score worse on the Gallup survey were socialists, which exactly half of Americans said they wouldn’t vote for—although, ironically, “socialist” is a label Sanders—a self-described “democratic socialist”—affixes to himself to explain the core of his political philosophy.

“The religiously unaffiliated, which includes atheists and other nonreligious Americans, are the largest voting bloc in the United States,” the Center For Inquiry’s letter statement noted. “And despite whatever ‘points’ DNC staffer Brad Marshall thought could be gained among his Southern Baptist peeps, the religiously unaffiliated are now the largest belief group among Democrats. Aside from the intolerance and narrow-mindedness expressed in Mr. Marshall’s suggestion, it would also be a very effective way for the Democratic Party to alienate one of its largest constituencies.”

The statement went on to call for Marshall’s resignation, following in the footsteps of outgoing DNC Chairwoman Debbie Wasserman-Schultz, who announced on Sunday she was stepping down from her position.

Representatives from the DNC did not respond to a request for comment.

For his part, in a Sunday appearance on CNN, Sanders bluntly cleared up the matter of his religious beliefs. “First of all, I am not an atheist,” he said. “I mean, it is an outrage and sad that you would have people in important positions in the DNC trying to undermine my campaign. … It goes without saying the function of the DNC is to represent all of the candidates, to be fair and even-minded.”