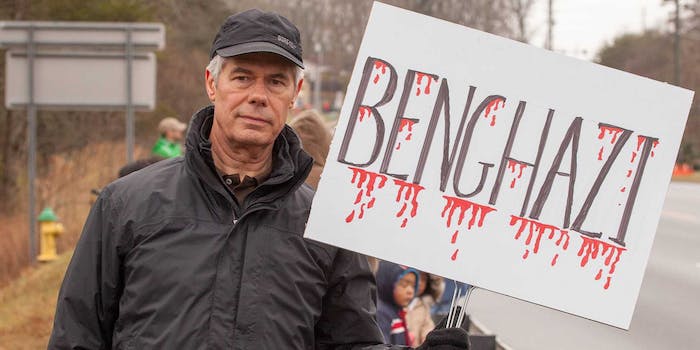 There is an old truism in Washington that if you have to release a piece of information, but would prefer that information not get a lot of publicity, the best time to do it is Friday afternoon. Not only are journalists less likely to cover cover stories that come down the pipeline on Friday afternoons, but people looking forward to the weekend are less likely to read them.

Not to cast aspersions on the motives of the Republican-led House of Representatives Intelligence Committee, but there may be a reason why its two-years-in-the-making investigative report about what really occurred during a 2012 raid on the U.S. embassy in Benghazi, Lybia was released to the public on a Friday afternoon.

The 36-page report found not only that neither the military nor the CIA acted improperly during the raid—in which four Americans were killed, including Ambassador Chris Stevens—but also largely cleared Obama administration appointees.

“We spent thousands of hours asking questions, poring over documents, reviewing intelligence assessments, reading cables and emails, and held a total of 20 committee events and hearings,” Mike Rodgers (R – Mich.) and C.A. Dutch Ruppersberger (D – Md.), the ranking members of the committee said in a statement to the Associated Press. “We conducted detailed interviews with senior intelligence officials from Benghazi and Tripoli as well as eight security personnel on the ground in Benghazi that night. Based on the testimony and the documents we reviewed, we concluded that all the CIA officers in Benghazi were heroes. Their actions saved lives.”

In the years since the incident occurred, Republican politicians have used the tragic events that transpired in Benghazi as a cudgel to hammer the Obama administration for being lax on national security.

One of the main arguments that conservatives have made is that in the days immediately following the attack, then-United Nations Ambassador Susan Rice incorrectly claimed it had been born out of a protest about an offensive video uploaded to YouTube called the “Innocence of Muslims.” In reality, there was no protest and the assault was specifically coordinated by Islamist radicals. There were allegations that Rice had lied to make the administration look good.

However, the report found that Rice’s inaccurate information had been based on nearly two dozen briefs from intelligence officials rather than political appointees and the ambassador was not deliberately being deceptive.

The report also debunked a handful of other rumors that had swirled around the event, such as that a CIA team was ordered not to embark on a rescue mission after the compound’s walls had been breached and that Ambassador Stevens was part of a clandestine operation to arm the Syrian rebels.

Even so, the report did not exempt the administration from criticism. It noted that the State Department, which was then led by presumptive 2016 Democratic presidential nominee Hillary Clinton, had done an insufficient job in preparing the facility for just such an attack and that prior requests to increase security at the compound had largely been ignored.

Most of the findings are nothing new. A half-dozen other governmental investigations into Benghazi have all essentially found the same thing.

“It’s my hope that this report will put to rest many of the questions that have been asked and answered yet again,” said Rep. Adam Schiff (D-Calif.), one of the lawmakers who worked on the report, in a statement, “and that the Benghazi Select Committee will accept these findings and instead focus its attention on the State Department’s progress in securing our facilities around the world and standing up our fast response capabilities.”

Photo via Will Thomas/Flickr (CC BY 2.0)