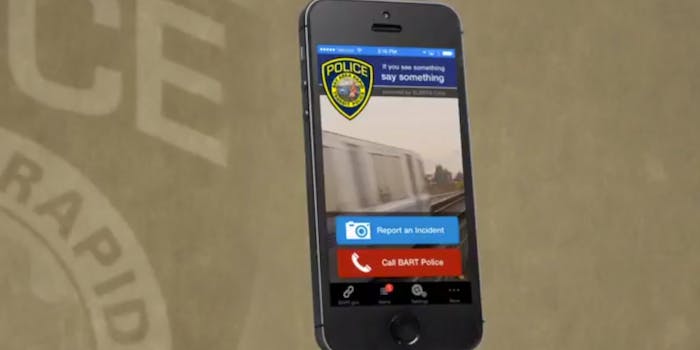 A new app lets San Francisco residents help fight crime as easily as they can post a selfie to Instagram.

But is that a good thing?

The Bay Area Rapid Transit (BART) has expanded their use of civilian reporting by launching a new phone app, which allows riders to report suspicious or criminal activity in real-time. The idea is to make law enforcement’s job a little easier and make public transportation a little safer.

Not everyone is as pleased as the authorities with the project, however. SF Weekly, San Francisco’s free alternative newspaper, quickly labelled the app, which is called BART Watch, as something that “turns passengers into snitches.” And that’s essentially correct.

BART Watch, which is free to download from the Apple App Store or Google Play, allows eager citizens to alert BART police by sending a text message describing a “crime in progress.” Riders are also encouraged to upload photos of alleged criminals. The transit authority can then use the pictures to surveil or apprehend suspects.

“BART Watch is important to our ‘See Something, Say Something’ campaign,” says BART’s Police Deputy Chief Ben Fairow. “It allows our riders to continue being our eyes and ears by discretely reporting suspicious or criminal activity.”

Reporting crimes may now be “as simple as sending a text,” but it is curious that BART doesn’t at least warn citizens to be careful around criminals who may not be happy about having their pictures taken.

As well, it seems that misuse of the app could potentially divert attention away from an actual crime. There’s no warnings about this on BART’s website, however, or in the spiffy BART Watch promotional video. Remember: It’s a crime to abuse the 9-1-1 emergency system and even using it properly in San Francisco may result in a severe beating. Regardless, BART is encouraging civilians to make liberal use of their new app. It certainly appears that way, at least, from roll out its received.

Only two questions remain: Will this app be used by other cities? And how long until it’s gamified? First person to photograph three serial masurbators on the J train earns a sheriff’s badge!