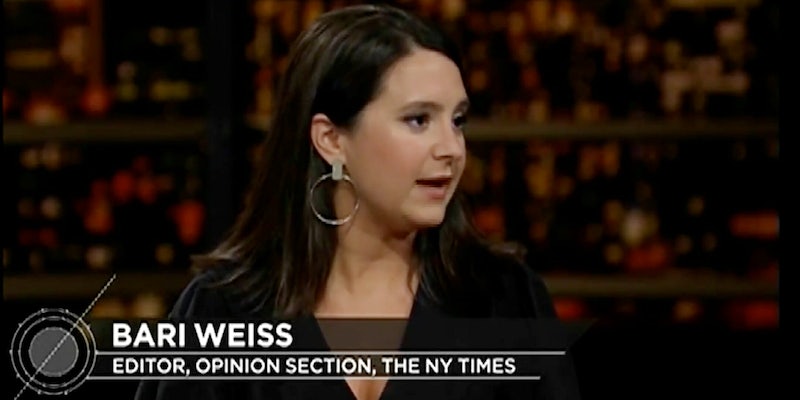 The group discussed the shooting at Santa Fe High School that happened Friday morning, which left at least 10 dead and another 10 wounded.

“One of the things that made me totally unable to vote for Trump was the famous [Access] Hollywood tape,” she said. “Well, the NRA has Donald Trump grabbed by the pussy, OK?”

Her comment was met with applause from the in-studio audience.

She said the U.S. should “try everything,” from refraining from naming the school shooters who “want the notoriety”—an idea presented by parents from the Parkland shooting—to holding the Texas gunman’s father “criminally liable” since the gun used in the shooting belonged to him. Sex columnist Dan Savage also suggested changing laws that make it impossible to sue gun manufacturers.

The group also discussed the fact that gun violence in America is definitely getting worse and that last year, more students died at school that soldiers in combat.

Weiss also mentioned the Santa Fe High School student, Paige Curry, who told reporters on Friday that she always knew that a shooting would eventually happen at her own school because it “happens everywhere.”

In the same interview, Weiss received criticism from viewers on Twitter because she said folks in the U.S. shouldn’t buy into feeling sorry for Palestinian protesters because she believes they wanted the Palestinian Massacre to happen to help their cause.

Bari Weiss thinks you shouldn't be concerned or outraged that Israel shot 1,350 & killed 62 Palestinians because that's what Palestinian leadership wants you to do & they somehow planned for Israel to shoot Palestinian protesters.

Love how the unquestioned assumption from @bariweiss here is, 'well yeah obviously Israeli forces had to murder protestors'. The kill count was 62-0. This wasn't even a 'clash' with protestors, this was murder from a safe distance. https://t.co/olwafbOvOo

Weiss is the same columnist who wrote the controversial editorial about Aziz Ansari after he was accused of sexual impropriety by Babe.net, in which she says the #MeToo movement has become an “emblem for female helplessness.”