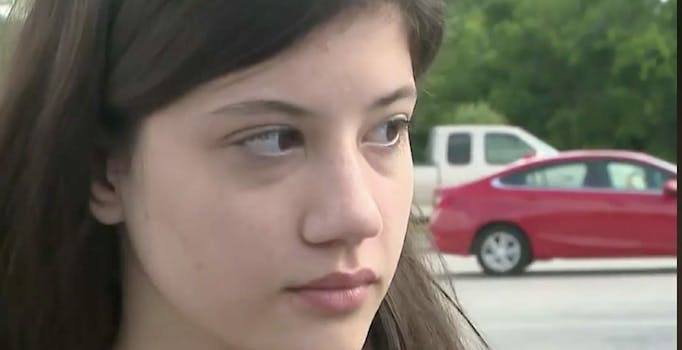 'I always felt like eventually it would happen here, too.'

In the wake of a shooting at Santa Fe High School in Texas—which has left at least eight people dead and at least three injured—survivors have begun to share with reporters what the moments of terror felt like. For one student, the shooting was terrifying—but not surprising.

In an interview with local TV station KPRC, student Paige Curry said she was in the theater room when she heard four or five shots ring out, although she was not initially sure what they were.

“Then I started hearing screaming, so I got up and I ran and we hid backstage in the workshop,” she said. She and her classmates then hid for about half an hour.

When the reporter asked what was going through her mind to know that this shooting had happened in her high school, Curry said she had already been prepared to run.

“I was thinking it was going to happen eventually,” she said. “It’s been happening everywhere. I was ready to run out, but my teacher told me to hide instead so that’s what I did.”

Videos shared on Twitter show that Curry was asked by more than one reporter if she anticipated the shooting.

Viewers pointed out how normalized school shootings have become, such that students aren’t surprised it happened at their school.

Interviewer: “Was there a part of you that was like, ‘This could not happen at my school?’”

This Santa Fe High School student broke my heart. That little girl should not be saying those words. pic.twitter.com/6ksl7Rmdi8

Just last month, Santa Fe students held their own school walkout for better gun control. One student’s tweet describes how the students read a poem by a Parkland survivor, handed out gun violence fact sheets and orange ribbon, did 17 minutes of silence, and then talked about ways to raise awareness for gun violence and make their voices heard.

One month ago #SantaFe High School walked out to protest gun violence. Today, one Santa Fe student told a news outlet: "It's been happening everywhere. I always felt eventually it would happen here, too." If that doesn't break your heart, you don't have one. https://t.co/Ra5AJt5GeQ

In addition to survivors of the shooting, politicians and Parkland survivors have also shared their responses to the shooting Friday morning.