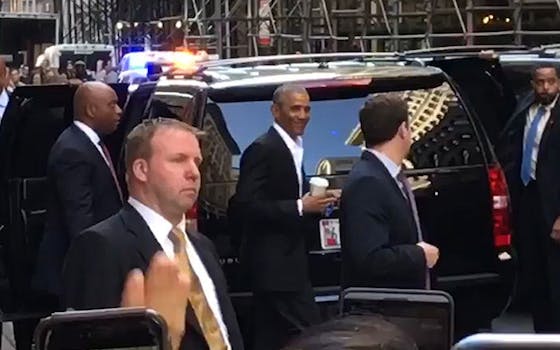 Obama shows up in NYC, everyone freaks out

Obama was reportedly meeting with a foundation about his presidential library.

A sighting of former President Barack Obama in Manhattan’s Flatiron District on Friday afternoon caused quite the stir.

Business Insider’s Allan Smith and Alex Heath caught footage of Obama exiting the building at 160 Fifth Avenue, much to the delight of passersby.

It is unclear what the nature of the meeting was. TMZ speculated that Obama was meeting with a member of the Simon Foundation, a philanthropy organization that has set aside $700,000 for the Obama presidential library. Malia Obama is also currently in New York City, interning at the Weinstein Company.

The former president has kept a relatively low profile since the inauguration of President Donald Trump in January. The last time Obama’s presence caused a ruckus was earlier this month when he went kiteboarding with Richard Branson.