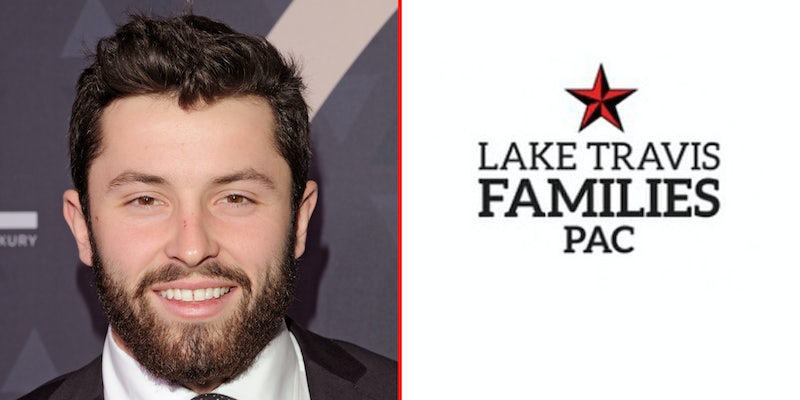 Why is an NFL quarterback helping an anti-critical race theory PAC in a local school board election?

National Football League (NFL) players often get involved in community issues as a way to give back and bolster their public image.

Cleveland Browns quarterback Baker Mayfield may have chosen a way of getting involved with the potential of backfiring. On Tuesday, NBC News reporter Mike Hixenbaugh tweeted that Mayfield has endorsed a slate of school board candidates in the Texas district where he went to high school.

“Has anyone reported on the fact that Baker Mayfield is getting involved in contentious school board politics?” Hixenbaugh wrote.

As Hixenbaugh noted, the candidates are supported by the Lake Travis Families PAC (political action committee), which was originally focused on opposing mask mandates and other pandemic restrictions, but has become increasingly concerned about critical race theory being taught in public schools. The Lake Travis Families PAC is based in the greater Austin, Texas area, where Mayfield grew up.

The affluent Austin suburb’s school board race has made national headlines in the past. Last year, the Daily Dot reported that a candidate had repeatedly espoused the QAnon conspiracy theory. The candidate denied it. They lost the race.

Nevertheless, Politico reported in February that the parents who started Lake Travis Families PAC are increasingly concerned with CRT.

“These days, the parents who started the PAC have expanded their angst beyond the pandemic,” Politico reported. “They’re especially focused on fears that critical race theory materials might slip into the curriculum despite a statewide ban on teaching it.”

Neither Lake Travis Parents PAC nor the three candidates Mayfield reportedly endorsed responded to requests for comment sent via email Tuesday afternoon. The Cleveland Browns also didn’t respond to a request for comment submitted via its website on Tuesday.

Racial justice has long been a divisive subject for the NFL. The issue became particularly contentious following the anthem kneeling protests kicked off by Colin Kaepernick in 2016.

Reactions to Hixenbaugh’s tweet ranged from sarcasm to disgust. “‘White dude who grew up in suburban Austin, are we really that surprised? lol,” commented @JorCal_.

Some opined that Mayfield may be contemplating a future as a pundit or politician.

“Now he’ll be able to claim the reason nobody wants him is because he’s been canceled by the NFL for his politics, and he can run for Congress instead,” wrote @jarodljohnson.

Mayfield indeed may be out of a job, as the Browns recently traded for his replacement, Deshaun Watson, who faced numerous accusations of sexual assault.

One pointed out that most NFL players are Black. “For a guy who aims to be the leader of a team comprised of mostly minorities; this is, at a minimum, a terrible way to maintain your credibility,” they said.

Some simply couldn’t understand why an NFL quarterback would bother to get involved in local politics.

“I couldn’t imagine being in my mid to late 20s, a professional athlete at that, worrying about damn school board politics,” wrote one.

The election for the Lake Travis Independent School Board is May 7.