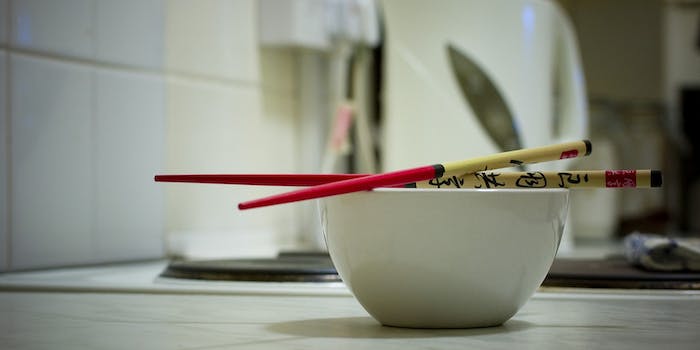 Can't tell if your foods gone bad? These chopsticks can.

The largest search engine in China is selling a pair of chopsticks that will let you know if that soup you’re about to eat will kill you.

Baidu announced on Wednesday at its annual Baidu World conference that it is developing smart chopsticks that can alert their user if the ingredients in whatever dish they are touching—be it soup, rice, salad, or anything else—are unsuitable for eating.

The Wall Street Journal says that the chopsticks measure the freshness of the dish’s oils, the pH levels of the ingredients, and the total calories in the item. The measurements appear in a smartphone app that users pair with their chopsticks.

“In the future,” said Baidu CEO Robin Li, “you’ll be able to know the origin of oil and water and other foods—whether they’ve gone bad and what sort of nutrition they contain.”

Baidu, which is bigger than Google in China, has tried competing with its main rival in other ways as well. At the same conference this week where it announced the chopsticks, it also announced a prototype for a Google Glass copycat called BaiduEye.

Cnet reports that Baidu’s latest Web-enabled product started out as an April Fool’s Joke. At the time, the fake product touted itself as a necessity for “food security,” but food safety issues are a real and continuing problem in China, where lax safety regulations have led to a number of serious incidents.

The chopsticks, called kuaisou in Chinese, don’t have a price yet. Baidu said they aren’t even ready to be manufactured. This technology is still in the conceptual stage. And if you’re bad at using chopsticks, don’t worry: There’s always the smart fork.