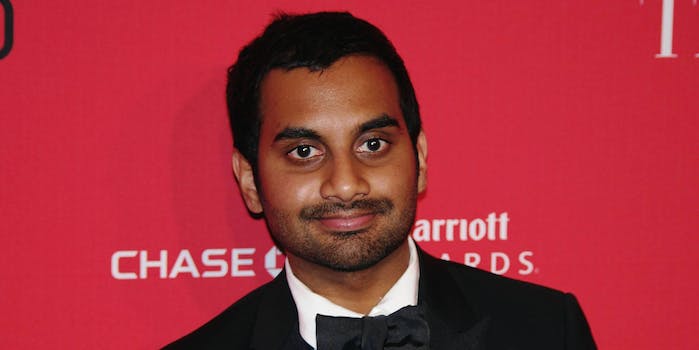 Aziz Ansari pens powerful op-ed on Trump, anti-Muslim bigotry, and his fears for his family

The 'Master of None' creator took to the New York Times to speak out.

Across traditionally left and right-wing circles alike, the fallout from The Donald Trump Effect appears to be in full swing.

On the conservative side, you’ve got longtime columnist George Will outright leaving the Republican Party over the real estate magnate’s ascension (and more specifically, his racial attacks on U.S. District Judge Gonzalo Curiel).

And, on the fairly liberal celebrity side of things, actor and comedian Aziz Ansari is also speaking out about the Donald. Ansari authored a stirring and deeply personal op-ed for The New York Times on Friday, with a title that says is all: “Why Donald Trump Makes Me Scared for My Family.”

Ansari’s editorial speaks to shared experiences that countless Muslim-American families know all too well. Experiences which, when had by families who don’t have celebrity relatives with a platform as massive as The New York Times, can get overlooked by America’s non-Muslim communities.

Ansari starts off the op-ed by sharing a simple text he sent to his mother after the Pulse gay nightclub shooting in Orlando, Florida, urging her to “do all your prayer at home,” and to stay away from any mosques.

The heartbreaking implication practically leaps off the screen. After the worst mass shooting in American history was committed by a shooter who reportedly pledged allegiance to ISIS, innocent Muslim-Americans throughout the country felt as if they were put on notice and under threat.

Sadly, there’s a well-worn history in America of racially and religiously motivated hate crimes surging as a backlash to high-profile tragedies. The same thing happened in the aftermath of the deadly shooting in San Bernardino, California in December.

After commenting on the discrepancy between America’s perception of Muslims and its reality―casting them as cardboard-cutout TV show terrorists rather than friends, neighbors, or even high-profile figures like Malala Yousafzai, Kareem Abdul-Jabbar or Zayn Malik―Ansari explains why it “doesn’t make sense,” and why it’s filling him with so much fear now that there’s such a belligerent presidential contender stoking the fires:

There are approximately 3.3 million Muslim Americans. After the attack in Orlando, The Times reported that the F.B.I. is investigating 1,000 potential ‘homegrown violent extremists,’ a majority of whom are most likely connected in some way to the Islamic State. If everyone on that list is Muslim American, that is 0.03 percent of the Muslim American population. If you round that number, it is 0 percent. The overwhelming number of Muslim Americans have as much in common with that monster in Orlando as any white person has with any of the white terrorists who shoot up movie theaters or schools or abortion clinics.

Ansari admits that, as a celebrity, he has a measure of class privilege that makes rising Islamophobia a slightly less apparent phenomenon. “When someone on the street gives me a strange look, it’s usually because they want to take a selfie with me, not that they think I’m a terrorist,” Ansari writes. He’s clearly also aware of the threat Trump’s political rhetoric poses for his family, and for his fellow Muslims who don’t share the benefits of celebrity.

Trump, as Ansari notes, has been stirring up conspiracy theories, racial demagoguery, and toxic suspicion towards Muslims for months, with his proposed ban on Muslim entry into the United States, his pledge to torture suspected terrorists and execute their families, and his “thousands of New Jersey Muslims cheered 9/11” canard being major examples.

It was that last, widely debunked claim that Ansari addressed in the conclusion of his op-ed, sharing the harrowing story of what he was doing on 9/11: not celebrating like a caricature of a religious extremist, as Trump might imagine, but experiencing the attack as a moment of outright horror:

The haunting sound of the second plane hitting the towers is forever ingrained in my head. My building was close enough that it shook upon impact. I was scared for my life as my fellow students and I trekked the panicked streets of Manhattan. My family, unable to reach me on my cellphone, was terrified about my safety as they watched the towers collapse. There was absolutely no cheering.

It’s worth noting that Trump’s xenophobic rhetoric hasn’t just been directed at Muslims, which Ansari also notes. In fact, it dates back to the very first day of his campaign.

When nearly the first thing a presidential hopeful decides to tell the world upon announcing their candidacy is “Mexican immigrants are criminals and rapists,” they’re saying something pretty drastic about their worldview, their priorities, and just how many people they’re willing to threaten to seize political power.