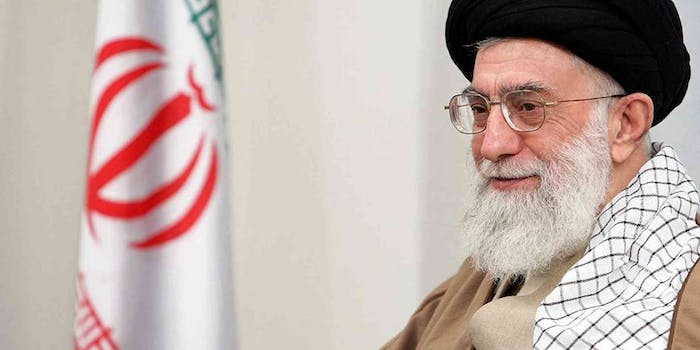 Even Iran’s Grand Ayatollah Khamenei is angry about Ferguson

Sometimes even people who live in glass palaces can throw tweets.

On Monday, Iran’s supreme leader sent out a series of tweets slamming the United States for the treatment of African-Americans on his English-language Twitter account.

Yes, even the Grand Ayatollah Ali Hosseini Khamenei is mad about Ferguson.

Americans don’t believe in their govt;popularity of #POTUS has dwindled day by day.Low turnout in recent elections is significant.#Ferguson

Americans don’t believe in their govt;popularity of #POTUS has dwindled day by day.Low turnout in recent elections is significant.#Ferguson

Our issue w #US is that they are #arrogant, thuggish and greedy; there are many worldwide & countless examples that approve this.

The fact that I and Iranians take anti-US stance is because of US govt’s arrogance. We have no problems w US as a nation. #Ferguson

One of Khameni’s tweets included a link to the following video, uploaded to his YouTube account, showing footage of the Ferguson riots with voiceover narration charing the U.S. of violating the human rights of African-American citizens.

That propaganda video is the second in a series of clips posted by Khamenei entitled “395 Years a Slave.” The first video, which was posted in September, blasts the unequal treatment of blacks prior to and during the Civil Rights movement.

Similarly, this series of tweets wasn’t the first time Iran’s de facto leader has referenced the shooting of African-American teenager Michael Brown by Ferguson, Mo. police officer Darren Wilson, as well as the destructive protests and severe police reaction that followed. He has taken to social media to blast the U.S. about the ongoing events with some regularity in recent weeks:

We don't seek to gain the confidence of US; we don't need that. We don't trust you; your ppl do not trust you either. #Ferguson

African-Americans r descendants of those who lived in their rich land but US looted& enslaved them.#Ferguson #Slavery pic.twitter.com/kUwi5izqL1

If US govt hadn't systematically ban its ppl from knowing the truth, movements like the 99% would've been formed in a larger scale.#Ferguson

Khameni has attempted to tie the events in Ferguson with one of Iran’s most long-standing criticisms of the United States: America’s deep support for Israel.

Is it not a shame for a country that its presidential candidates compete for showing devotion to #Israel in election campaigns? #Ferguson

The day when American nation realize their socioeconomic problems stem from domination of #Israel over their govt, what’ll happen? #Ferguson

Khameni has even taken to utilizing the imagery and language of the Occupy Wall Street movement and the hacktavist collective Anonymous, which has been deeply involved in protesting American law enforcement in Ferguson since the hours after Brown’s death.

Ppl of US are dissatisfied w/the 1% which spends national funds on supporting Israel.https://t.co/VrePN953Gr#Ferguson pic.twitter.com/NcTY6IzqSi

A report by the international nonprofit Human Rights Watch, charged that the Iranian government systematically engaged in a torture campaign to suppress political dissenters. When widespread protests arose in the wake of the 2009 elections, which many in the country believed were marred by fraud, the government cracked down by killing dozens of people and arresting thousands more.

The hypocrisy of the Ayatollah’s Ferguson campaign was one many on Twitter were more than happy to point out.

How about your popularity dictator? MT @khamenei_ir Americans don’t believe in their govt; popularity of #POTUS has dwindled #Ferguson

@khamenei_ir Ldr. Khameini, you use #Ferguson to criticize USA. How would Iran punish Michael Brown for this act: https://t.co/Ynu17bswMP

Photo by Sajed.ir of “The Foundation of Holy Defence Values, Archives and Publications”/Wikimedia Commons (CC BY-SA 3.0)