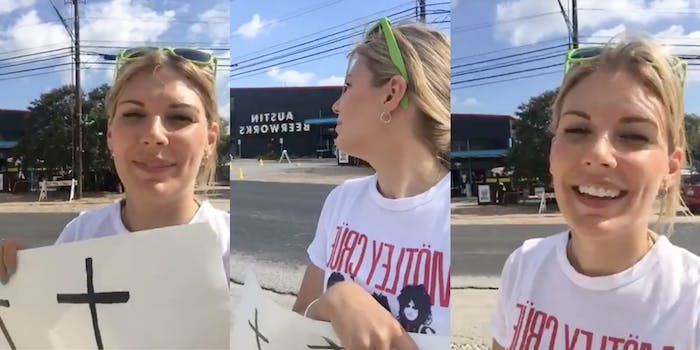 Woman protests outside of Texas brewery, accuses it of being ‘Satanic cult’ in viral video

'I think we're getting ready for some Armageddon-sized human-trafficking busts.'

A woman filmed herself protesting outside of a Texas brewery last week over claims that the business is part of a “Satanic cult.”

“The whole beer industry in Austin, Texas is one big Satanic cult,” Pritchard said. “Human traffickers, pedophiles, the worst kind wield the most power in this area…”

Pritchard goes on to state that the area in question holds “dark energy” and that her mission is to collect “God’s people.”

The woman further claims that her proof of the brewery’s involvement in human trafficking is based not on “baseless accusation” but on “personal experience.”

“They advertise it. They’re super arrogant about it,” she says. “The front of the building is the god Atlas holding up a keg instead of the world.”

Pritchard adds that she also saw two trailers behind the business that “beer peddlers” supposedly shouldn’t have.

The business, according to the woman’s conspiracy, also leaves shoes and teddy bears outside whenever it has supposedly sacrificed a child.

“They post this shit on Instagram,” Pritchard says. “They have their way of communicating with each other, and then I learn their language, and I’ve been analyzing these sick f*cks for a year.”

Pritchard then points her camera at an alleged child’s hair bow on the ground across the street from the bar as further proof of her conspiracy.

Facebook users commenting on the video argued over whether the stream was legitimate or some sort of troll. Others pointed out the irony of Pritchard wearing a Mötley Crüe T-shirt, a metal band from the ’80s known for using Satanic imagery.

“I think we’re getting ready for some Armageddon-sized human-trafficking busts,” Pritchard adds.

In a video uploaded to YouTube on Monday, Pritchard also points to other breweries such as Jester King and Live Oak as participants in the Satanic cult while calling on help from “all lightworkers.”

Analysis of Pritchard’s Facebook page shows repeated references to conspiracy theories, including those related to the apocalypse.

The Daily Dot reached out to Austin Beerworks to inquire about Pritchard’s protest outside of its store on Friday but did not receive a reply.