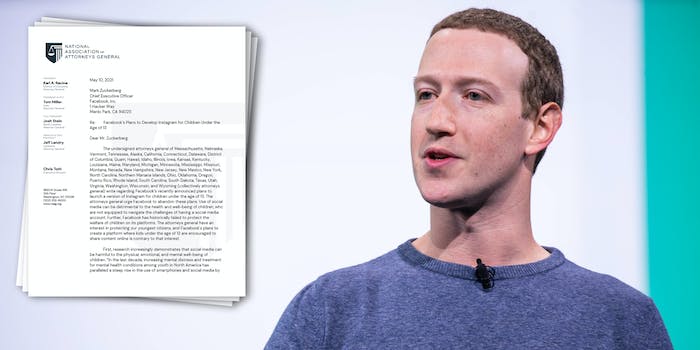 'In short, an Instagram platform for young children is harmful for myriad reasons.'

A group of more than 40 attorneys general from across the country are urging Facebook to scrap its plans to build an Instagram that would cater to children under the age of 13.

The social media giant’s Instagram for kids plan was first reported on by BuzzFeed News in March. Since then, the idea has faced significant backlash. Instagram currently does not allow children under the age of 13 to use the platform, although children routinely do.

In a letter to Facebook CEO Mark Zuckerberg sent on Monday, 44 attorneys general say they have a “interest in protecting our youngest citizens” and that Facebook creating an Instagram for children “is contrary to that interest.”

The letter cites mental health and privacy issues that would come with an Instagram built for children.

The attorneys general note that studies have shown that social media can be “harmful to the physical, emotional, and mental well-being of children” and that children are “not equipped to handle the range of challenges that come with having an Instagram account.”

They also criticize the social media giant for having a record of not protecting the safety and privacy of children on its platforms.

“It appears that Facebook is not responding to a need, but instead creating one, as this platform appeals primarily to children who otherwise do not or would not have an Instagram account,” the letter reads. “In short, an Instagram platform for young children is harmful for myriad reasons. The attorneys general urge Facebook to abandon its plans to launch this new platform.”

The letter was signed by both Democrats and Republicans from states including Massachusetts, California, Illinois, Michigan, New Jersey, New York, North Carolina, Ohio, Wisconsin, and numerous others.

You can read all all of the letter sent to Facebook by the attorneys general here.