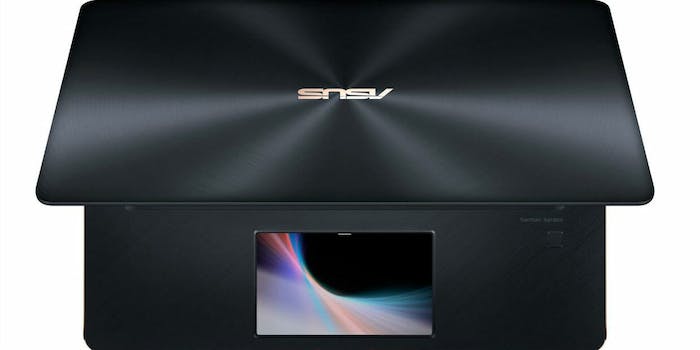 Trackpads aren’t great, so Asus is replacing them with touchscreens

Of the many bizarre devices we saw at the Consumer Electronics Show (CES) back in January, Razer’s laptop with a smartphone built into the chassis seemed the least likely to find its way onto the market. There were too many potential problems for it to feel like a viable product. For example, we couldn’t help but wonder what hit an additional display would take to battery life or how the two screens could seamlessly integrate.

Asus doesn’t seem to care about those potential limitations, though. The Taiwanese laptop maker will release its own version, and, surprisingly, release it later this year. The Asus ZenBook Pro 15, also known as the UX580, trades its mechanical trackpad for a 5.5-inch 1080p IPS display called ScreenPad.

Unlike the Razer concept, the secondary display on the ZenBook Pro 15 isn’t a full-blown smartphone. Where Razer wants to bring the convenience of a laptop chassis—its keyboard and large display—to a smartphone, Asus is hoping to complement the power of a laptop with the flexibility offered by a touchpad.

Apart from doing everything a normal touchpad can do, the ScreenPad will come with a configurable toolbar (think of Apple’s Touch Bar) and work with Microsoft Office, Spotify, YouTube, and the calculator app. ScreenPad can also mirror a smartphone using the Asus Sync app so you can drag windows between the two displays.

Asus will leave it up to developers to decide what comes next. Video games could use the screen to hold additional information, like a character’s inventory or health, while streaming apps like Netflix or YouTube could move the scroll bar and controls onto the touchscreen, away from the main viewing display.

The UX580 will be the company’s top-of-the-line ultrabook when it ships in mid-July, and the touchpad display isn’t the only reason for its $2,300 price tag. The computer’s top specs include a 4K display, the latest 8th-generation i9-8950HK CPU, a Nvidia 1050TI GPU, 16GB of RAM, and four 1TB SSDs.

Needless to say, a decked-out version of the UX580 will be a computing powerhouse, and we wholeheartedly recommend you splurge on that setup. I mean, if you’re already considering a laptop that essentially has a smartphone for a touchpad, you may as well go all in.