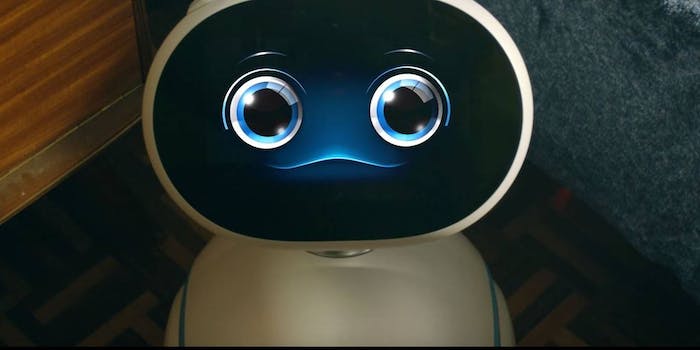 Zenbo, Asus’s terrifying robot, will cost $600 and probably kill you

The future is coming—and it just wants to serve you. Or does it?

Hollywood has long used robots to churn up fear in the minds of moviegoers. There is the always relevant HAL-9000, the long-lived Terminator franchise, the 2004 film I, Robot, and one of the most highly regarded films of 2015, Ex Machina.

But nothing creates fear like reality, and Asus’s terrifying new smart robot is a very real thing. Introduced in an appropriately spooky 11-minute advertisement, the Asus Zenbo looks like Eve from Wall-E strapped to a Star Wars droid.

Here is the Asus Zenbo, the next member of your family.

Thomas the Tank Engine charm aside, Zenbo is about the creepiest smart device we’ve ever seen.

The robot is capable of making video calls and monitoring your house with cameras that support facial recognition. It responds to voice commands in a SpongeBob SquarePants-esque tone, plays media, provides reminders, sends out a warning call when it senses someone in need of help, and keeps children occupied with educational games.

Zenbo does not yet have a release date, but it will cost $600 when it becomes available as a “21st century butler.”