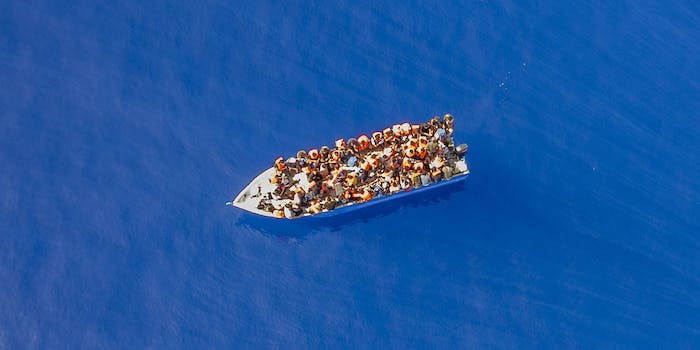 The backlash is not surprising.

Last week, the Associated Press (AP) was quick to retract its plans to release an NFT after Twitter users claimed the video profited from human suffering.

The latest out-of-touch NFT release blunder comes via one of the most prestigious entities in journalism. Amid the news surrounding Russia’s invasion of Ukraine, the AP announced its latest NFT drop: A five-second video of migrants in an overstuffed boat crossing the Mediterranean.

The responses were abysmal: as a quantitative measure of how much Twitter disliked this release, the announcement was ratioed, with just 24 likes compared to over 300 quote retweets in time that it was up.

Twitter users were quick to call out the AP’s seeming lack of forethought on this particular NFT release. User @ExhaustedElox said “This is a grotesque way to earn a profit,” while @one0nine asked “Wait, hang on – are you actively monetizing imagery of human suffering? Is that what I’m seeing here? Are you sharing the proceeds with anyone in that boat? Did you get their permission to film or share this?”

Nominally, photojournalism on the AP’s site brings indirect profits to the publisher—through site traffic, ad views, shares—but the sale of a photo or video as an NFT places profit front and center. In one instance, an AP NFT brought the publication $1,799 in a single transaction.

The subject matter of the AP’s NFTs range from the 1938 Pacific Coast Motorcycle Championships to a lone polar bear on ice in the Franklin Strait to the submerged ruins of an 11th-century Romanesque church.

But when the subjects of images are in a moment of crisis—such as the one of migrants—people wondered whether a publication should directly profit off such a fraught moment.

The AP’s tweet was deleted just four hours later and was followed up by an apology thread where the AP expressed “This was a poor choice of imagery for an NFT” and that they are “immediately reviewing our efforts … AP’s mission is to inform the world with accurate, unbiased journalism.”

AP spokesperson Lauren Easton told the Daily Dot that the migrant video “has not and will not be put up for auction” and that it will be immediately reviewing its efforts towards its NFT marketplace.

The Associated Press is an American nonprofit news agency covering all facets of news, ranging from politics to sports. Founded in 1846, it has since grown to operate more than 250 bureaus across the world.

Though the migrant boat NFT will not be for sale, others remain listed on the AP’s marketplace and have been announced to be sold soon. Rather than electing to mint and sell NFTs on one of the largest marketplaces like OpenSea or Rarible, the AP has created its own.

Built by Web 3 platform provider Xooa, the AP’s NFT marketplace was announced in January and has been releasing a steady stream of photography NFTs that “capture compelling scenes from around the world and mark some of the most memorable moments in history.” Each NFT comes with associated metadata like the time, location, equipment and technical settings for the photo, with most NFTs selling for a few hundred dollars each.

According to the AP marketplace’s FAQ page, purchasing a photography NFT grants the holder rights to display their piece for personal use, but not to create derivative work or use the image to sell a product. Purchasing an AP NFT specifically does not transfer copyright: the FAQs state that copyright “always remains with the photojournalist and the AP.”

The current NFT is not the only in the AP’s collection to fall under scrutiny. Twitter user @arlenparsa quote-tweeted the AP’s announcement of its forthcoming NFT marketplace, jokingly predicting that there would be “a photo of a wildfire that burned down a family’s home.”

A month after the prediction, the AP announced two photographs of the Marsh Fire would be released on its marketplace. The 2016 Marsh Fire in Tuolumne County, California resulted in the evacuation, but not destruction, of approximately 30 homes.

When questions arose in the AP’s official Discord about the consent and involvement of photographers to their photos being released as NFTs, according to screenshots shared on Twitter, an AP director replied stating that “All photographers are consulted and are active participants in the project” and that the photographers receive a 12-60% commission of the sale, paid out in crypto.

The day before the migrant boat NFT tweet, the AP announced it would release as an NFT three images from Anja Niedringhaus, a German photographer who was killed in Afghanistan while reporting on the 2014 election there. The AP has outlined that a portion of the proceeds from Niedringhaus’ photo NFT will be donated to the International Women’s Media Foundation and be applied towards the “construction of a photojournalism museum in Anja’s name.”

Dwayne Desaulniers, the AP’s director of blockchain and data licensing, took to Discord to address members’ concerns, such as one message stating that “Dwayne wants a world without adblock, without archive.is, without a possibility that someone somewhere might wring a tiny bit of the AP’s journalistic output of them without paying for that privilege.”

In a time of dwindling journalism profits, publishers are forced to choose between the ad revenue and subscription models. Adblock and paywall evasion further complicate the matter. NFTs could prove to be an effective fundraising effort, journalism outlets utilizing the digital scarcity NFTs provide, but the backlash to the AP’s most recent NFT efforts prove the public might not yet accept such a solution.

When a Discord member asked pointedly about the ethics of profiting off of images of human suffering, Desaulniers pointed to his belief that “blockchain tech can help real facts become immutable,” which is “a key driver of our work,” a statement a Discord member labeled as “word salad.”

The AP is not the first journalism outlet to flirt with blockchain technology. Time released a collection of three digital magazine covers as NFTs in March 2021, which sold for $435,000. The Economist followed suit in October 2021 with the $420,000 sale of an Economist NFT cover, with the proceeds donated to an independent charity.

Bitcoin and Ethereum news site Decrypt took a different approach to integrating crypto with its site by incentivizing engagement on its app with a set of reward tokens that can be redeemed for merch or premium content, but can’t be exchanged for fiat.

Would the AP have received such criticism if it had decided to release limited edition physical prints, rather than NFTs? Though the exploratory “pilot program” NFT marketplace could prove to be an effective revenue stream as traditional income methods for publishers fizzle out, the recent backlash demonstrates the difficulty of diving into a new, fraught market.