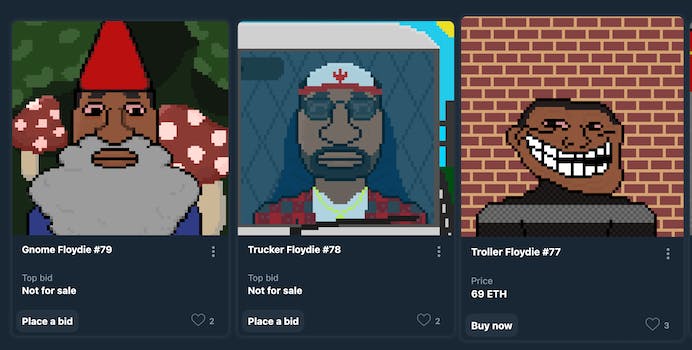 The 'Floydie' NFTs have been available since December 2021.

As first reported by Input, the NFT image collection, called “Floydies,” initially launched on OpenSea on Dec. 7, 2021. Their seemingly sarcastic description on their now-banned OpenSea page reads, “Floydies are a unique and progressive way to celebrate the monumental life of George Floyd. George Floyd was a victim of racism and has since become an inspiration to the BLM [Black Lives Matter] movement, as well as to those who stand for equality. Owning a Floydie is a great way to express yourself and your beliefs!”

But the motivations behind the NFTs seem to be far from progressive.

On the NFT collection’s website, a note from the person purportedly behind it all says that the project “started as a way for a bored guy to have a bit of fun” and said that they would “always fight” for “free speech.”

There are two types of Floydie NFTs: “Generative” Floydies, which means that their appearance is algorithmically created, and “hand-crafted” ones, which are described as being “made with love” by the founder.

Some hand-crafted Floydies available for sale include George Floyd drawn as a bank robber, wearing a suicide vest (titled “Islam Floydie”), in prison, wearing a derogatory “autism awareness” T-shirt, and wearing a police uniform. Other NFTs depict Floyd as an Orthodox Jewish man wearing the Star of David, while another NFT, which is named after the practice of “buck breaking” (sexually abusing Black men during the slave trade), shows Floyd chained up.

These hand-crafted NFTs, the site says, “started the entire project.” But they were, according to the site, also the reason it is “one of the only projects to be banned off of OpenSea for political reasons.”

NFTs, an acronym of non-fungible tokens, are a unit of data stored on a blockchain that can be sold or traded. Each NFT’s blockchain is unique, and it is the data stored on the NFTs blockchain that gives it value. NFTs are usually attached to images, videos, or GIFs. While many investors and creators of NFTs see them as an opportunity for monetary gain, for some creators, it is a sophisticated means of trolling.

The Twitter page for the Floydie NFT collection includes a link to a publicly viewable Telegram group chat, which has 197 members. It appears that the chat, which was viewed by a Daily Dot reporter, is moderated by the creator of Floydie NFTs, while members of the chat appear to be regular buyers of the product.

Telegram is a social media service that is widely popular with far-right fringe communities, such as QAnon conspiracy theorists, white supremacists, anti-vaxxers, and neo-Nazis.

Chat logs viewed by the Daily Dot include various racist memes and NFTs, including NFTs of Floyd edited as a banana and monkey. Other NFT collections such as “Chocolate Drop” are also shared in the chat, with one NFT depicting a person in blackface as part of a “minstrel show.”

The chat logs also suggest that the group wants to release an NFT of Derek Chauvin, the police officer who killed Floyd. A Telegram user named Floydie, who appears to be the user behind the NFTs of the same name, said in one message that “the Chauvin Floydie will be part of the last drop. I want Mr. Chauvin to be a very special NFT.”

George Floyd died in June 2020 after Chauvin, a police officer, knelt on his neck for nine minutes. Chauvin was trying to arrest Floyd for allegedly using a counterfeit $20 bill. Floyd’s death mobilized people around the world to protest against anti-Black racism and police brutality. Chauvin was later found guilty of murdering Floyd in April 2021 and was sentenced to over 22 years in prison.

Telegram chat logs viewed by the Daily Dot also include various racial slurs and racially charged memes, with one user sharing a drawing of what appears to be a lynching. Users also appear to make countless antisemitic jokes and slurs. Speaking to Input via Twitter DM in December 2021, a person behind the Floydie NFT Twitter account denied being racist, saying they were just an “opportunist.” At the time of writing, the link to the Telegram chat is still available in their Twitter profile.

The Floydie NFT collection was recently banned from OpenSea, according to a tweet by fellow NFT platform Scatter. Scatter, which currently list Floydie NFTs, describes itself as a “free speech platform.” On their website, it says, “Scatter lets you buy, sell, and mint NFTs without fear or worry of removal. We put privacy first, and refuse to deplatform any legal content.”

In a statement to the Daily Dot, an OpenSea spokesperson said, “OpenSea has a zero-tolerance policy for listings that incite hate. Content like this has no place within the OpenSea community. The original collection was banned in December when it was reported to us for violating our Terms of Service. It was brought to our attention that a copycat collection recently resurfaced, and we’ve banned that as well, along with its creator.”

As first reported by BuzzFeed News, the official Floydie Twitter account recently posted a statement claiming that each NFT comes with an “N-word pass” for white people to use. The statement, which is publicly available to view on Twitter, says that “the N-word is one of the most powerful words in the English language.”

“There is great discrimination in the distribution of these N-word passes,” the statement says. “Who is allowed to own an N-word pass is at the sole discretion of Black people.”

The ethnicity of those behind the NFT project is unknown, although some members of the affiliated Telegram chat claim to be Black.

Speaking to BuzzFeed News in February via Twitter DM, the owner of the Floydie Twitter account said they were doing a “great service to the BIPOC community” by making these NFTs and their intentions had been “misrepresented.”

When asked by BuzzFeed News about their “N-word pass,” the user declined to comment.