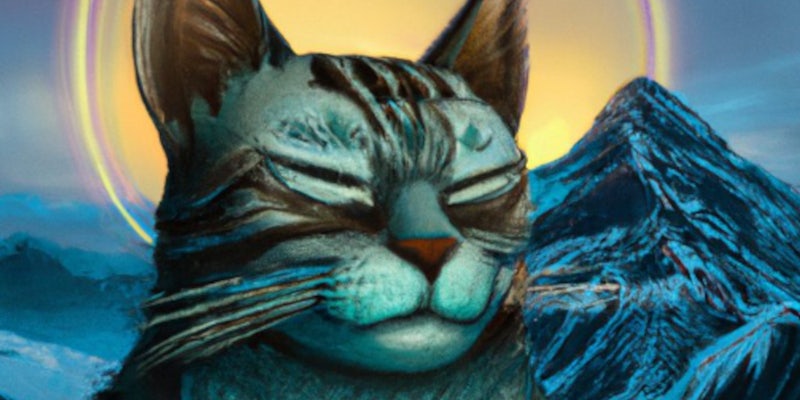 ‘A wise cat meditating in the Himalayas searching for enlightenment’: AI can now generate hyper-realistic pictures from your random sentences

The artificial intelligence (AI) research laboratory OpenAI has created a new tool that can turn any descriptive sentence into realistic-looking images and art.

Known as DALL·E 2, an update to the ground-breaking DALL·E system that debuted last year, the new software was unveiled on Wednesday in a video on Twitter.

The DALL·E 2 system is a neural network that has been fed countless pictures and trained how to create imagery based merely on what it describes as “natural language.”

The tool, which will not be released to the public, will be made available in the near future to researchers and likely integrated into third-party apps.

The developers stated that limitations were also integrated into the AI to keep it from producing violent imagery or being used to spread misinformation.

Aside from creating original pictures, the tool can also add objects into existing images or art.

Sam Altman, an employee at OpenAI, showcased DALL·E 2’s breathtaking capabilities in a thread on Twitter by allowing users to decide what images they would like to see.

One user who asked to see a “landscape with tropical forests, solar panels, wind turbines and a futuristic city in the background” was presented with an impressive image in just two minutes.

Another user who asked to see “a wise cat meditating in the Himalayas searching for enlightenment” was also presented with a stunningly accurate piece of art.

Needless to say, the Twitter users looking on were stunned.

Other employees at OpenAI began sharing creations of their own as well. Prafulla Dhariwal, a co-creator of the DALL·E 2 system, showed what the AI was able to be create after being asked to show a “kid and a dog staring at the stars.”

Andrew Maybe, another employee at OpenAI, showed off the tool’s capabilities after asking it to create “a raccoon astronaut with the cosmos reflecting on the glass of his helmet dreaming of the stars.”

“It really is beyond my wildest expectations… Clear images is something great per se, but I can’t help but to focus on how outstanding it is in depicting emotions,” one user responded.

But even more impressive is the tool’s ability to create images or art in specific styles. Whether its asked to create a photo-realistic picture or a piece of art in the style of Andy Warhol, DALL·E 2 can seemingly conjure up whatever it is asked.

The tool’s impressive abilities have astounded many but shocked others. Some argue that DALL·E 2 could endanger the livelihoods of artists, while others warn that it could be used to deceive the public if used by nefarious actors.

OpenAI has said in remarks on its Github page that it has gone to great lengths to analyze and mitigate the dangerous its cool could pose.

“OpenAI reached out to researchers and industry professionals, primarily with expertise in bias, disinformation, image generation, explicit content, and media studies, to help us gain a more robust understanding of the DALL·E 2 Preview and the risk areas of potential deployment plans,” the company wrote.

As with all technology, these new innovations will undoubtedly trickle down to the general public at some point in the future.