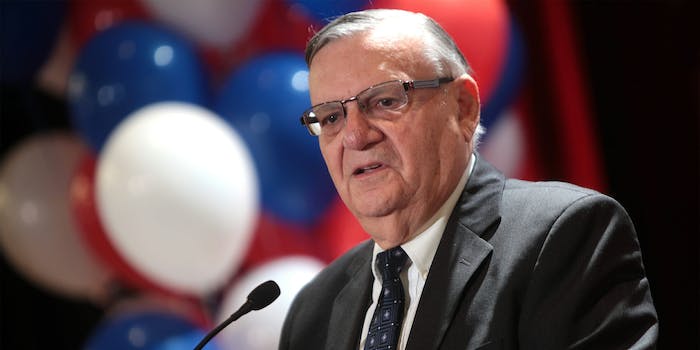 The former sheriff is a very controversial figure and Trump supporter.

Arpaio, who was found guilty of criminal contempt of court after ignored a court order to stop profiling undocumented immigrants, told the Washington Examiner that he has been exploring several options now that he is no longer facing jail time after Trump’s pardon.

Arpaio, 85, told the website that “a lot of people” in Arizona have been asking him to mount a challenge against Republican Arizona Sen. Jeff Flake, a frequent target of Trump’s.

“All I’m saying is the door is open and we’ll see what happens,” Arpaio said. “I’ve got support. I know what support I have.”

Trump has had Flake, an outspoken critic of the president, in his crosshairs for weeks. During his much-criticized speech in Pheonix, Arizona, last week, Trump bashed Flake without saying his name, saying “nobody knows who the hell he is.”

The president then took to Twitter to criticize Flake, calling him “weak on crime & border!”

Phoenix crowd last night was amazing – a packed house. I love the Great State of Arizona. Not a fan of Jeff Flake, weak on crime & border!

Flake is already facing a primary challenger in 2020, former state Sen. Kelli Ward, whom Trump has promoted on Twitter.

“Great to see that Dr. Kelli Ward is running against Flake Jeff Flake, who is WEAK on borders, crime and a non-factor in Senate. He’s toxic!”

Great to see that Dr. Kelli Ward is running against Flake Jeff Flake, who is WEAK on borders, crime and a non-factor in Senate. He's toxic!

Arpaio has a long history of brutal treatment of undocumented immigrants and inmates, among other controversial activities. He forced inmates to stay in a “tent city” in sweltering heat. (Arpaio once referred to the tent city as a “concentration camp.”) He orchestrated a murder plot against himself as a publicity stunt, which later cost taxpayers over $1 million due to a lawsuit brought forth by the man he framed for the fake assassination attempt. And he engaged in widespread racial profiling of Latinos.

Arpaio ultimately lost favor with his conservative base after costing taxpayers tens of millions of dollars defending his policing tactics in court, resulting in his 2016 election defeat.

You can read the Washington Examiner‘s entire report here.