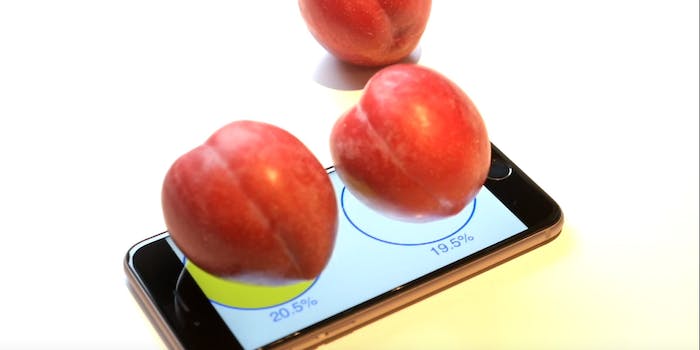 Apple’s iPhone 6s can weigh plums, in case you ever need it to

If Apple won't allow third-party scale apps, it better be developing its own.

Apple‘s iPhone is strangely good at performing random tasks that the company doesn’t advertise. While it’s not touted as such, the iPhone 6s was discovered to be nearly waterproof, and now it has a new trick up its sleeve: its new pressure-sensitive display doubles as a highly accurate digital scale.

When developer Simon Gladman realized that Apple’s 3D Touch feature used data on the firmness of presses on an iPhone’s screen—and when he needed a simple way to weigh some plums—he did what any self-respecting iOS tinkerer would do: He built an app to weigh plums on his iPhone.

“Truth is, Plum-O-Meter was me tinkering for an hour before breakfast on Saturday!” Gladman told the Daily Dot. “It was nothing more than a little experiment, so I’ve been fairly taken aback by the response.”

The app is fairly simple: When two plums are placed on the iPhone screen, whichever one weighs more creates a greater pressure on display. The heavier plum is then highlighted. A video showing how the app works has already garnered more than 300,000 views.

Unfortunately, Apple isn’t particularly happy about the idea of people weighing things on the iPhone’s screen. The company has already rejected one 3D Touch scale app in the App Store. “It appears they’re not allowing 3D Touch to be used for weighing things,” Gladman said.

It’s a disappointing end to what could have been an extremely interesting sub-genre of utility apps, but the possibility still remains that Apple could be working on a scale feature of its own and simply doesn’t want to spoil its own surprise.

As for Gladman, he said he was moving on from the Plum-O-Meter project to work on “more serious apps,” including an iPad Pro version of an advanced image-editing app called Nodality.