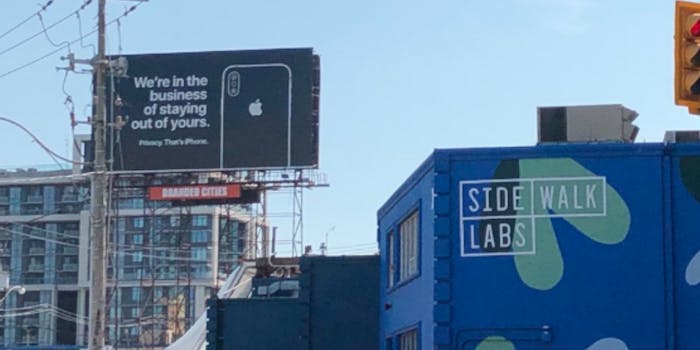 Apple is trolling Google with this billboard about privacy

'We’re in the business of staying out of yours. Privacy. That’s iPhone.'

Apple set up a new billboard this week that appears to take aim at the privacy practices of tech rival Google.

New Apple billboard outside Sidewalk Toronto HQ: “We’re in the business of staying out of yours.” pic.twitter.com/I24iAxkXzZ

The black-and-white advertisement includes an iPhone and a message that claims Apple is serious about user privacy.

“We’re in the business of staying out of yours,” the billboard reads. “Privacy. That’s iPhone.”

Launched in 2015, Sidewalk Labs aims to improve every aspect of urban life by transforming cities into “smart cities.” With the help of everything from surveillance cameras to high-tech sensors, Sidewalk Labs hopes to transform a small section of Toronto into the city of the future by utilizing copious amounts of data.

But the initiative has been met with its share of pushback. Although Sidewalk Labs promises not to sell the data it gathers without residents’ consent, Google’s privacy track record has many calling the city a futuristic nightmare.

In a letter to Toronto’s city council, tech critic and U.S. venture capitalist Roger McNamee railed against Google and its “dystopian vision.”

“No matter what Google is offering, the value to Toronto cannot possibly approach the value your city is giving up,” McNamee wrote. “It is a dystopian vision that has no place in a democratic society.”

This is not the first time Apple has relied on real-world advertising to take on its fellow tech giants. In January, Apple placed a similar billboard in Las Vegas ahead of the annual CES trade show.