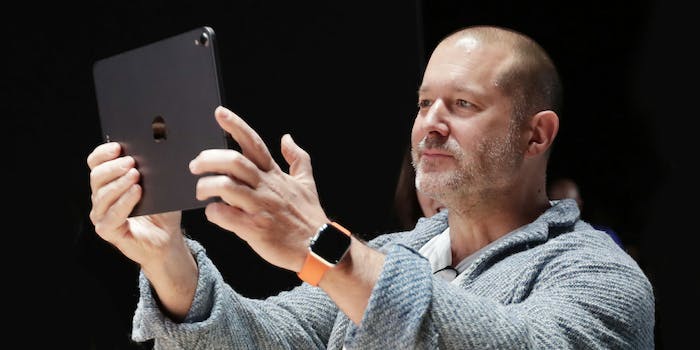 The company's chief designer is exiting the company; what happens now?

On Thursday, Apple announced that its chief designer Jony Ive resigned from the company. Ive is starting his own design firm, LoveFrom, with Apple as its first client. “While I will not be an [Apple] employee, I will still be very involved—I hope for many years to come,” Ive told the Financial Times in an exclusive interview about his departure. “This just seems like a natural and gentle time to make this change.”

In many ways, Ive is right: Apple has long dominated the consumer technology industry, and its stranglehold over the mobile app marketspace has positioned it well to continue to do so. Last month at WWDC, Apple’s annual developer conference, Apple announced that the App Store is home to 20 million developers, that it’s created more than 1.5 million U.S. jobs, and has helped programmers earn more than $120 billion worldwide. The App Store is not without its faults, but the fact remains that it’s the most viable path forward for app creators, and this gives Apple a major advantage over its competitors going forward—with or without Ive, whose primary focus was hardware design.

In fact, in recent years hardware became something of a weak spot for Apple. Though AirPods managed to become a consumer hit, they were initially mocked for their less-than-stunning looks; they remain a point of contention and controversy, often referred to as a symbol of technology elitism. Then there was the MacBook keyboard issue that plagued the company this past spring. And while Apple designers, under Ive, managed to elevate the iPhone to become a luxury technology product (and to be associated with a much higher price point), the smartphone has been criticized for its too-easily shattering screens, difficulty (in some cases impossibility) to repair, and ongoing battery issues.

Where does Apple go from here?

Ive might be wrong about his departure coming at a “natural and gentle time”: The iPhone is Apple’s cash cow, and its sales are slipping. The upgrade cycle is finally starting to wane on consumers. The biggest criticism of Ive has always been that he’s a designer first, that he will sacrifice usability and function in favor of insanely thin, beautiful products. Perhaps that penchant for looks above all else came at a cost, but it’s also true that Apple fans are obsessed with aesthetics. The post-Ive Apple will see its designers placed under the operations team, maybe indicating that the company is focused on addressing its wonky hardware issues. But will it sacrifice its compulsive dedication to product form factor? Apple buyers have shown they don’t just want workhorses—they also want them to be beautiful.

Apple is at a crossroads. Competition is heating up, China is losing interest in its smartphones, and in the midst of it, Ive is leaving. The company will undoubtedly retain its market standing, but it certainly feels as if it’s weathering an internal struggle.

Ive was a bit of an omnipotent, unseen figure at Apple—the wizard behind the curtain (almost literally, as he preferred to appear at launch events via voiceover only); it can be difficult to understand the totality of his effect at Apple, and beyond. Here is the recommended reading on Jony Ive, including reactions to his exit as well as past reports that may help the consumer technology world read the tea leaves on what this means for Apple’s future.