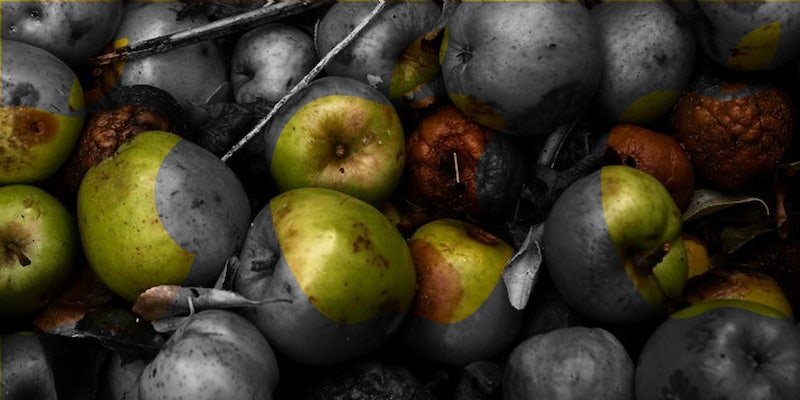 Mistake-prone Apple must come to an end

How many nicks can Apple withstand until it starts to bleed?

How many nicks can Apple withstand until it starts to bleed?

2014 looked like another brilliant year for Apple. The company that launched the smartphone revolution unveiled iOS 8, the most developer-friendly and open iteration of its mobile operating system to date.

Apple’s Mac operating system will receive a full redesign with the upcoming release of OS X Yosemite. The iPhone, the company’s flagship device grew bigger and wider with the release of the iPhone 6 and iPhone 6 Plus, which received rave reviews from the press and consumers alike.

The Apple Watch has been announced, and CEO Tim Cook believes it will be an integral part of Apple’s future.

With two overhauled operating systems, two new iPhones, another gigantic holiday quarter about to get underway, and a watch that it hopes will continue its hot streak, Apple looks like a company that cannot lose.

Despite what appears to be a glowing exterior, Apple has had a number of prominent blunders in the last few months. There was the iOS 8 software development kit (SDK) that was released in June, which, according to developers that spoke to us, was filled with issues.

This caused some delays in app updates that were expected to arrive when iOS 8 was released last week.

Apple also slipped on approval times for those app updates, with a current average of nine days before an updated app will be approved for purchase through the App Store—up from its usual six day average—according to crowdsourced data from developers on App Review Times.

In late August, the iCloud hacking scandal—known as Celebgate—took place. Hundreds of nude photos of female celebrities were stolen from iCloud and leaked on the Internet. In emails obtained by the Daily Dot, Apple was warned of security holes in iCloud six months before Celebgate happened.

And this past Wednesday brought the fiasco that was iOS 8.0.1, a quicker than usual update after a major software release by Apple, designed to fix a number of problems in iOS 8. One of Apple’s flagship features in iOS 8, HealthKit, was essentially unusable at launch, after Apple pulled HealthKit-enabled apps from the App Store. Instead of getting rid of the bugs, iOS 8.0.1 included new ones, disabling cell service and Touch ID for many iPhone 6 and iPhone 6 Plus users. Apple pulled the update less than two hours after it was released, but not before it caused another public outcry.

Early Thursday morning, Apple released a support page telling users affected by the bug in iOS 8.0.1 to manually reinstall iOS 8.0, an unprecedented move for a company whose unofficial motto is “it just works.”

In a statement to the Daily Dot upon the release of iOS 8.0.2 on Thursday night, Apple apologized “for inconveniencing the iPhone 6 and iPhone 6 Plus users who were impacted by the bug in iOS 8.0.1.” The update remedied the issues caused by iOS 8.0.1 for most users, but some Australian iPhone owners still experienced issues after the update.

As every technology company does, Apple has issues with bugs and security holes from time to time, but the increased frequency of these issues gives credence to the idea that Apple may not be as focused as they once were.

The fact that two-factor authentication didn’t protect iCloud backups—where it is believed hackers stole at least some of the celebrity nude photos from—until last week is a dramatic oversight by Apple.

And when an over-the-air software update kills the “Phone” in iPhone, it isn’t just another bug. There is no excuse for a company with the amount of quality assurance testing that Apple conducts to release an update that causes major issues to such a core function of iPhones.

For a company with the financial resources and reputation that Apple possesses to make these kinds of mistakes on what is starting to look like a consistent basis is a dramatic failure of their procedures.

This isn’t even taking into account the more trivial issues Apple has had over the last few weeks—livestream issues during its iPhone and Apple Watch event, an unwanted U2 album, and bendgate—which are at the most annoying (and can be partially attributed to the manifestation of social media and the press on a slow news day), but still significant.

In the last four years, Apple has had to deal with major issues including antennagate in 2010, the debacle that was Apple Maps in 2012, and the flurry of problems that have come up in the last three months. One noticeable gaffe per year is one thing—many companies have issues from time to time—but the rate at which these problems have increasingly surfaced shows that Apple’s issues are deeper than just a mistake here or there.

A source with knowledge of the situation believes that Apple may have put too much on its plate for its current staff to handle, after moving its entire product lineup to the fall, and with the addition of Apple Watch. Ben Bajarin, Chief Industry Analyst at Creative Strategies believes Apple has overextended its staff as well.

“I don’t have any hardcore evidence on this, but observationally I see how understaffed Apple is by noticing that new Apple buildings pop up every week in places I didn’t see them before,” Bajarin told the Daily Dot. “Apple clearly needs more people, but more importantly they don’t have the space. This is why [Apple is] building a [new] campus, but it is still a few years out,” Bajarin explained.

Bajarin does believe Apple’s staffing issues can be fixed, but notes that the streak of mistakes must end. “If we know anything from Apple it is that they learn fast from these things and the key is to make these errors less consistent. They can’t string a number of bad releases together,” Bajarin warned.

The world’s largest company cannot simultaneously be one of the most mistake-prone. It isn’t good for Apple, or for the technology industry. For Apple to continue this streak of clumsiness is simply unacceptable by its internal standards, and by the standards the public has placed on the company.

With the debut of Apple Pay in October, mistakes will take on a whole new meaning for the company. One error that causes credit card numbers to be exposed or become vulnerable to hacking will garner Apple more derision than it has ever collectively experienced. Not allowing someone to unlock their phone with their fingerprint is one thing—but when it comes to handling a person’s money, the stakes are much higher, and the mistakes more costly.

While Apple will by all accounts sell another record number of phones before the end of the year, the company has nearly exhausted all its goodwill with the public when it comes to these major errors. Apple needs to get it together, before the next mistake costs the company much more than just bad press.

Photo by rore/Flickr (CC BY 2.0) | Remix by Fernando Alfonso III