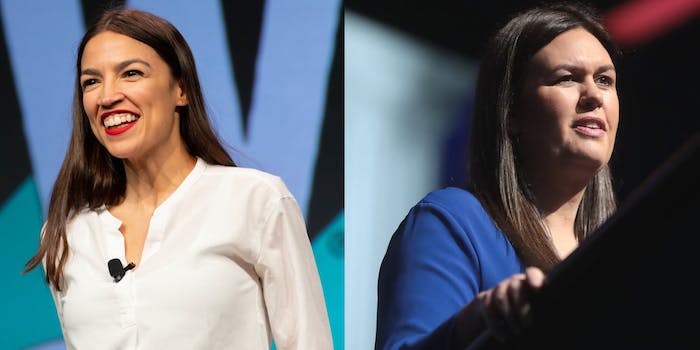 'Why don’t you go out and try delivering groceries?'

Rep. Alexandria Ocasio-Cortez (D-N.Y.) has no time for politicians pushing for people to resume operations as normal in the midst of the coronavirus.

She proved so on Thursday when she pushed back at comments from Sarah Huckabee Sanders, the former White House press secretary.

In a pointed tweet, Sanders criticized Ocasio-Cortez for warning government officials to not reopen the economy too soon without funding “mass testing, contact tracing (and) healthcare for people.”

There currently is a growing rift between Democratic and Republican government officials on how soon businesses closed due to the coronavirus, should reopen.

“[email protected] says Americans should boycott work,” Sanders tweeted. “As usual she’s wrong. The goal should be for Americans to SAFELY return to work because unlike AOC and members of Congress, most of us actually have to show up at work to get paid and support our families!”

Ocasio-Cortez proceeded to take a dig at Sanders, calling out her lack of White House press briefings during her tenure as press secretary.

“If you’re so supportive of this (administration’s) plan, why don’t you go out and try delivering groceries for a living (without) health insurance or mass testing?”

In a separate tweet, Ocasio-Cortez took further aim at President Donald Trump and Republican Gov. Brian Kemp, who announced some businesses in Georgia would resume operation on April 24, according to Vox.

Some didn’t think of it as wise for Sanders to call out Ocasio-Cortez, who is known for her active Twitter presence and having a relatively high follower count compared to other members of Congress.

Sanders also came after Ocasio-Cortez while on Fox News, calling her understanding of the situation “out of touch.”

“There are people that are really hurting and the president is looking for ways to protect them and help them,” Sanders said during a Fox News segment.

However, Sanders isn’t alone in her opinion, with many having critiqued Ocasio-Cortez over similar reasons.

Some Americans have taken to protesting state and local stay-at-home orders, according to USA Today, gaining attention and support from Trump.

Currently, about 22 million people have applied for unemployment in the U.S. as a result of COVID-19, ABC News reports. Researchers suggest ramping up testing to three times the current amount—which is about 146,000 tests per day—in order to “safely reopen” the country by May, the New York Times reports.

During an interview with VICE, Ocasio-Cortez called out Trump for encouraging to reopen the economy.

“Only in America when the president tweets about liberation, does he mean go back to work,” Ocasio-Cortez said during the interview. “When we have this discussion about going back or reopening, I think a lot of people should just say ‘No, we’re not going back to that.’ We’re not going back to working 70 hour weeks just so we could put food on the table and not even feel any sort of semblance of security in our lives.”