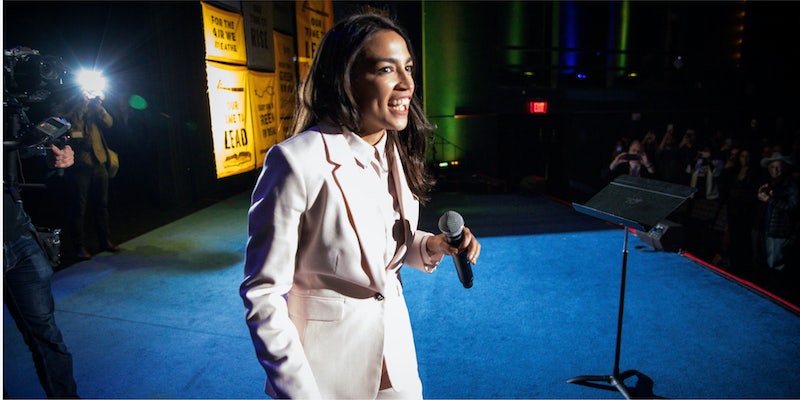 AOC's recent town halls have been marred by trolls

Rep. Alexandria Ocasio-Cortez (D-N.Y.) can’t get a word in.

Ocasio-Cortez is using this recent congressional recess to hold town halls for constituents but is being beset by trolls every time she steps out.

Last week, the Bronx native was grilled by protestors at a town hall over her vote to send weapons to Ukraine, according to a video posted to Twitter.

“You ran as an outsider, yet you’ve been voting to start this war in Ukraine,” the protestor said in the video. “You’re voting to start a third nuclear war with Russia and China.”

The protestors, who appear spread throughout the crowd but seem to be coordinated, wanted to emphasize that Tulsi Gabbard left the Democratic Party because the party has become “war hawks.”

Exactly what they wanted out of Ocasio-Cortez, however, is unclear.

Last night, another town hall of hers was also disrupted by a large group of protestors with a drum and signs.

The protestors grilled Ocasio-Cortez over gender issues, safety, and her support of the United Nations. Protestors didn’t seem interested in asking questions so much as disrupting the town hall.

In another video of the confrontation, the lights in the auditorium are turned off, forcing Ocasio-Cortez to evacuate the room until they were turned back on.

In an Instagram story, Ocasio-Cortez responded to the hecklers, calling them “right-wing Trumpers” and not her actual voters.

Ocasio-Cortez said the group was “parroting pro-Putin talking points” about Ukraine, and that the comparison to Gabbard was odd, given she voted for more defense budget increases during her tenure in Congress than Ocasio-Cortez.

She also pointed out that the hecklers at the first town hall waited until a deaf constituent was asking a question so it would look like attendees were angry at their comments about war and not interrupting a disabled person.