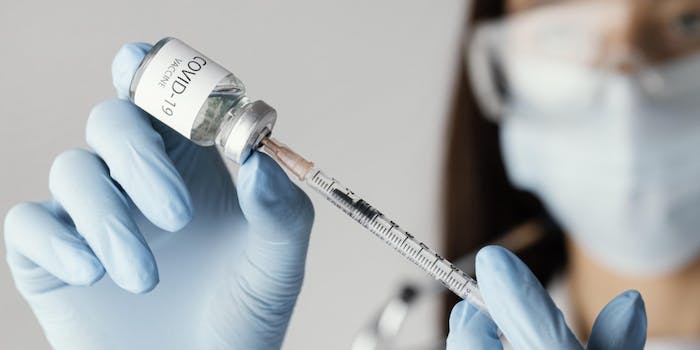 Anti-vax Facebook users are begging for prayers after catching COVID

The posts reveal the devastating effects of medical misinformation.

An eye-opening thread on Twitter lists dozens of instances in which anti-vaccine Facebook users asked for prayers after catching COVID-19.

The thread, posted by the user @TepidButterASMR on Wednesday, shows the overwhelming number of results when searching for “covid prayers” on Facebook.

In the first example shown, a Facebook user who previously bragged about not being vaccinated and even referred to masks as “face diapers” in July called on his “prayer warriors” this month after testing positive for the virus.

“Calling all my prayer warriors: Me and my wife Lisa were diagnosed Covid positive last Tuesday,” wrote Randy Foshee. “We both also have pneumonia along with Covid.”

After noting that his close friends had been infected as well, the Facebook user asked for spiritual aid.

“People this stuff is ugly and very hard to get rid of,” the user added. “Thank you for all your prayers.”

Another user known as Ken Riddick likewise had a change of tune after contracting the disease. In late July, Riddick discussed how he was the only person in his local Ross clothing store without a mask. Days later he was on his way to the emergency room.

The comments didn’t stop there. In yet another example, a Facebook user that argued that getting a vaccine would lead to being implanted with a microchip fell ill as well.

The sister-in-law of the user asked for prayers on Facebook after the user, named David Williamson, was hospitalized.

“Pray for David Williamson.. David is one of the strongest people I know!” the woman wrote. “And knowing that he’s this sick is truly unbelievable.”

The posts are endless. A man who pleaded with his followers to get the vaccine after his 23-year-old unvaccinated son Justin died was inundated with comments from anti-vaxxers.

“It is very real and hate your having to go through this ordeal with Justin and I hope everything turns out for the best… but I’m not taking that shot I don’t trust it!” the user replied. “And even if he had got the shot he could’ve still contracted the covid.”

The Daily Dot was able to independently confirm that the posts featured in the thread did in fact come from Facebook and featured anti-vaxxers who claim to have been infected.

These posts, which continue on in the thread, reveal the devastating effects that misinformation can have.