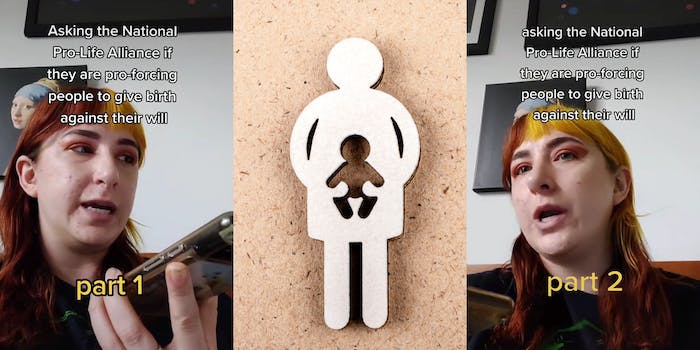 'I wanna hear what they have to say about ectopic pregnancies.'

A viral TikTok exposes a purported representative from a prominent anti-choice group admitting that it supports forced birth.

The video is part of a recent series by TikToker Aidan Strange (@ironaiidan). Strange, a musician and independent journalist, calls anti-choice groups and records their responses to pointed questions about reproductive rights.

Her series is an apparent response to a leaked opinion from the United States Supreme Court that would overturn Roe v. Wade, the landmark 1973 case that established a constitutional right to an abortion while allowing for certain restrictions. The opinion isn’t official or final yet, but the court concedes it is authentic.

The TikTok is a recording of Strange reportedly calling the National Pro-Life Alliance and speaking to a person who gave their name as Brenda.

Strange first clarified that the organization opposes abortion in all circumstances. Brenda agreed that it does.

Strange then said that she was trying to ascertain the Pro-Life Alliance’s official position on forced birth.

“Is your organization’s official stance that you are pro-forcing people to give birth against their will?” she asked.

“That is a rather convoluted way to say it really because we don’t force people to get pregnant,” Brenda replied in lieu of answering directly.

“But if they do then there’s a life and that life takes precedence over the distress that they might have of pregnancy and birth.”

Strange persisted. “So the answer is ‘yes,’ the organization is in favor of forcing adult people or teenagers … to give birth against their will,” she said.

“I would not say those words,” Brenda said, also calling Strange’s question “convoluted” and a “twisted way” to put it.

Strange asked whether Brenda would disagree with her statement on the facts. Brenda denied that her question was based on facts.

Noting that the National Pro-Life Alliance is one of the largest contributors to the anti-abortion movement, Strange insisted that her question speaks to potential legislation. Republican-led governments in many states have codified or are considering further restricting reproductive freedom.

“Therefore, it actually is a fair question in the basis of reality,” Strange said.

A seemingly flustered Brenda replied that they’re not the proper person to speak to journalists and offered to transfer Strange to the National Pro-Life Alliance’s chief executive officer. (In a comment, Strange said the CEO doesn’t answer phone calls.)

The TikTok has accumulated more than 165,000 views since Strange posted it on Thursday.

Commenters love her approach. Many praised her cheerful tone and polite yet firm delivery.

Several made jokes about the pretzel logic Brenda used.

“Well Brenda, you might not force people to get pregnant, but sometimes other people do,” one wrote mockingly.

Some chimed in with ideas for other questions to ask anti-choice groups. “I wanna hear what they have to say about ectopic pregnancies,” wrote one. Strange encouraged them to “call em. Record it.” Ectopic pregnancies aren’t viable and can be deadly.

Strange has continued contacting anti-choice groups and recording their responses. She also hopes others follow in her lead.

“I encourage y’all to also call these organizations and politely ask them their stances,” Strange wrote on her TikTok.

“They falter when they see that people view them as forced birthers because that’s all they are.”