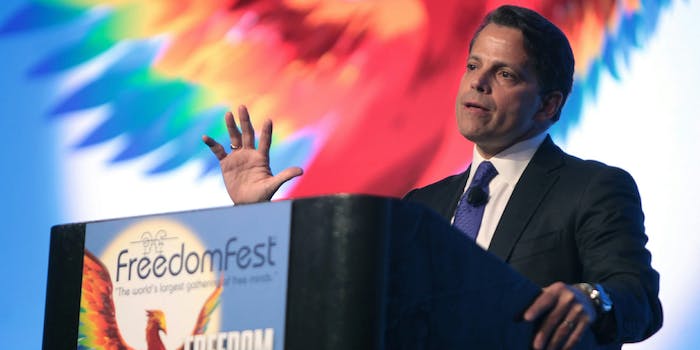 Anthony Scaramucci probably is hoping you don't see these tweets.

While Scaramucci may not want the public to see what he tweeted about the man he will defend on a daily basis, the internet is written in ink, not pencil.

Scaramucci also gave an interview on Fox Business in 2015 that didn’t paint his now-boss in the most positive of light.

“He’s a hack politician,” Scaramucci said on the news channel. “He’s probably going to make Elizabeth Warren his vice presidential nominee with comments like that. It’s anti-American, it’s very, very divisive. I’ll tell you who he’s going to be president of, and you can tell Donald I said this–the Queens County bullies association. You gotta cut it out now and cut out all this crazy rhetoric.”

Scaramucci ended the segment by calling Trump an “inherited money dude from Queens County” and predicted Trump would “implode” in the presidential race.

Scaramucci on Trump, Aug 2015: “a hack… anti-American… bullies association… don’t like the way he talks about women” https://t.co/s8BW4RPloK pic.twitter.com/fvEtTiW2Eo