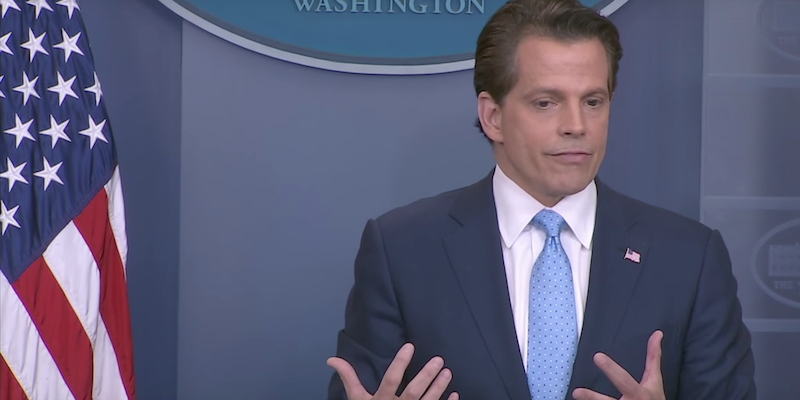 President Donald Trump‘s new communications director has quite the vocabulary.

Lizza’s interview adds another twist to Scaramucci’s cacophonous first week in the White House, during which he has vowed to fire everyone on the communications team to stop leaks before appearing to publicly accuse Priebus of leaking to reporters.

Scaramucci’s conversation with Lizza preceded his publishing of a tweet in which he said that someone had leaked his financial disclosure form, first reported by Politico, that was actually a publicly available document. However, the communications director was also reportedly upset that his dinner with President Trump, First Lady Melania Trump, Fox News host Sean Hannity, and former Fox News executive Bill Shine was reported on. It was the leak about this meeting that inspired Scaramucci to call Lizza.

The conversation that followed is one of the most remarkable of the Trump era. Here are some of the key quotes—and remember, these are things Scaramucci said while on the record with a reporter:

1) Scaramucci demands Lizza reveal his source about the dinner:

“I ask these guys not to leak anything and they can’t help themselves. You’re an American citizen, this is a major catastrophe for the American country. So I’m asking you as an American patriot to give me a sense of who leaked it.”

“They’ll all be fired by me. I fired one guy the other day. I have three to four people I’ll fire tomorrow. I’ll get to the person who leaked that to you. Reince Priebus—if you want to leak something—he’ll be asked to resign very shortly.”

“Reince is a fucking paranoid schizophrenic, a paranoiac,” he said, presumably exaggerating. (There is no evidence Priebus suffers from any mental illness.) Scaramucci then spoke as though he were Priebus: “‘Oh, Bill Shine is coming in. Let me leak the fucking thing and see if I can cock-block these people the way I cock-blocked Scaramucci for six months.’”

4) Scaramucci rejects the “the swamp”:

“The swamp will not defeat him,” he said (of himself). “They’re trying to resist me, but it’s not going to work. I’ve done nothing wrong on my financial disclosures, so they’re going to have to go fuck themselves.”

6) Scaramucci says he wants to “kill all the leakers”:

“What I want to do is, I want to fucking kill all the leakers, and I want to get the president’s agenda on track so we can succeed for the American people.”

“OK, the Mooch showed up a week ago. This is going to get cleaned up very shortly, OK? Because I nailed these guys. I’ve got digital fingerprints on everything they’ve done through the FBI and the fucking Department of Justice.”