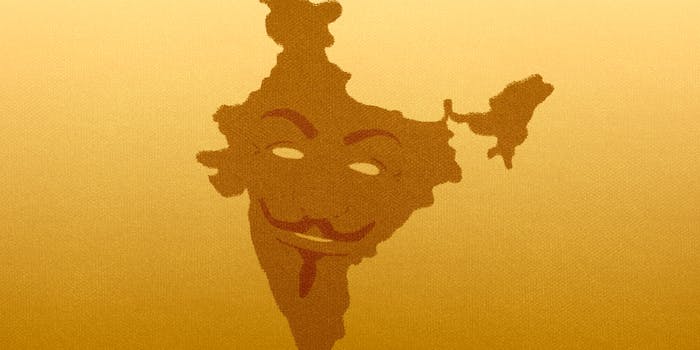 It's not a good look for the Indian government.

A group identifying as an Indian spinoff of the hacktivist group Anonymous has claimed responsibility for taking down an Indian government website that had just published the names and email addresses of tens of thousands of net neutrality supporters.

The saga stems from late 2014, when Indians first began openly petitioning the Telecom Regulatory Authority of India to support net neutrality, much as how in the U.S., millions successfully convinced the Federal Communications Commission to adopt strong open-Internet rules. Activists behind a movement to shore up support at savetheinternet.in  were able to confirm over a million confirmed emails to TRAI—an unprecedented number—though the final tally was likely far higher.

But then, in a head-scratching move, TRAI decided to publish at least 10,801 of those responses in bulk, without bothering to redact anyone’s personal information, including email addresses.

In response, a group called AnonOpsIndia said it would hit TRAI with a distributed denial-of-service (DDoS) attack, overwhelming its servers and knocking its site offline. As of press time, www.trai.gov.in had been offline for more than three hours.

The attack has divided net-neutrality supporters in India. “I think this is a very worrying development, and I hope this doesn’t turn the government of India and TRAI against a legitimate movement for net neutrality.” Nikhil Pahwa, a member of the loose coalition behind savetheinternet.in, told the Daily Dot.

“The regulator, which exposed email addresses of a million citizens to potential scraping, should have taken the documents off themselves,” Pahwa added.

As of this writing, TRAI’s site is still down.

Update 8:24am CT, April 28: TRAI’s website came back online Monday, but has since been knocked offline again, with AnonOpsIndia claiming responsibility.

According to TRAI officials, however, the agency’s website outage was merely “due to some technical glitches.”