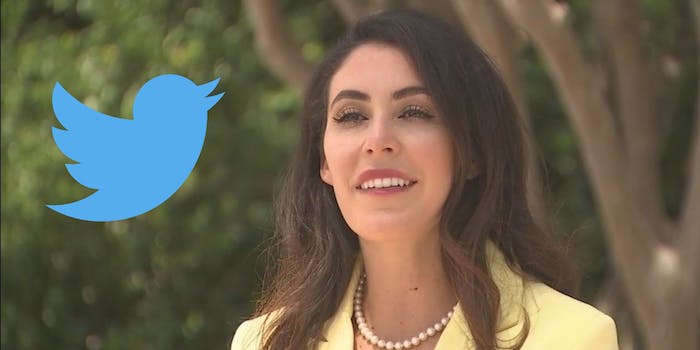 Anna Pauline Luna claims Twitter's inaction amounts to an endorsement of her opponents.

Luna, who failed to unseat Rep. Charlie Crist (D-Fla.) last year, filed a complaint with the FEC in October after being unable to obtain a blue-check verification on Twitter. Twitter had pledged to verify candidates after they’d won their respective primaries.

In a copy of the lawsuit obtained by Fox News, Luna alleged that Twitter’s refusal to verify her account, while simultaneously providing it to her opponents, was comparable to an illegal corporate political donation.

“Twitter, Inc. verified the accounts of Plaintiff’s opponents while refusing to verify Plaintiff’s account, providing something of value to her opponents,” the lawsuit states.

Luna, who plans to run for Congress again in 2022, also argued that Twitter’s inaction continues to harm her political aims.

“Plaintiff has suffered – and continues to suffer – an injury-in-fact that is causally related to Defendant’s inaction,” the lawsuit continues. “Twitter, Inc. continues to selectively verify accounts, providing something of value to certain candidates while denying the same to Plaintiff—likely based on Twitter’s political views (though the reason for Twitter’s discrimination is irrelevant to this proceeding).”

But the verification issue hasn’t just affected Republicans. Jeff Sites, a Democrat who ran for Congress in Ohio last year, spent months attempting to get verified as well. It wasn’t until the tech website was contacted by the Verge that it opted to verify Sites’ account.