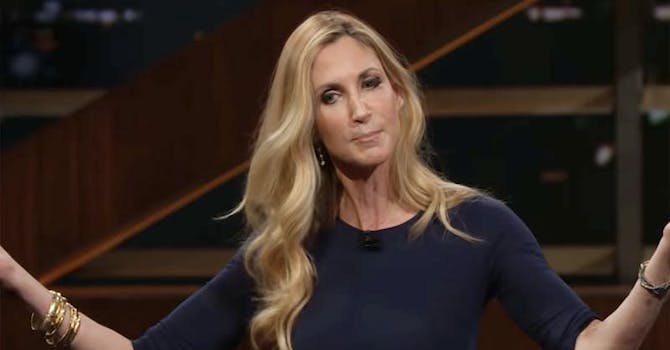 She stopped by 'Real Time with Bill Maher' to complain about Trump.

Ann Coulter took her pity party to Real Time with Bill Maher on Friday night to cry crocodile tears over President Donald Trump agreeing to reopen the government without securing funding for his racist border wall. Following Trump’s announcement, Coulter lashed out on Twitter, congratulating George H.W. Bush as no longer being the “biggest wimp ever to serve as president of the United States.”

She continued to build on that sentiment while hashing things out with her “frenemy” Maher.

“It’s crazy that I expect a president to keep the promise he made every day for 18 months,” she complained to Maher, adding that she, along with others in the president’s base, have rebelled over the issue.

Maher then brought up the tweet in which she harshly criticized the president and posed a valid question.

“Let me get this straight, you were convinced that Donald Trump was the guy, you voted for him—Donald Trump—and now you’re finding out he’s a lying con man,” Maher said. “What was your first clue?”

“This is the thing, OK, I’m a very stupid girl, fine,” she said after the audience was finished cheering and laughing.

“But that was actually a selling point with Trump, you can also make fun of me for writing [her book] In Trump We Trust: E Pluribus Awesome!” she continued. “Look, we’ve been lied to, over and over and over again by politicians, by respectable people, by Mitt Romney and George Bush and Obama and Clinton. We’re going to protect your jobs.”

Coulter then addressed the audience, which she admitted “is not wild” about her, telling them that they’re “being played” by the cheap labor pouring into country.

People on Twitter particularly latched onto Coulter’s declaration of herself as a “stupid girl.”

I believe her to be a hundred years old and already thru the terrigen mists. “Ann Coulter Admits To Bill Maher: ‘OK, I’m Very Stupid Girl' About Donald Trump” perfect couple by the way. Ew.

I imagine Ann Coulter is drowning her sorrows at whatever the White Nationalist version of the Regal Beagle is.

And she is still "A VERY STUPID GIRL" thinking Trump should be allowed to build a 6th century wall when modern times calls for modern border security. Ann Coulter, and other backward political pundits, belong somewhere back in time and should stay there.

Whatever you want to call her, there is likely no love lost between Coulter and Trump. The president allegedly unfollowed the outspoken commentator on Twitter back in December after she called him “gutless” over his failed border wall promises.