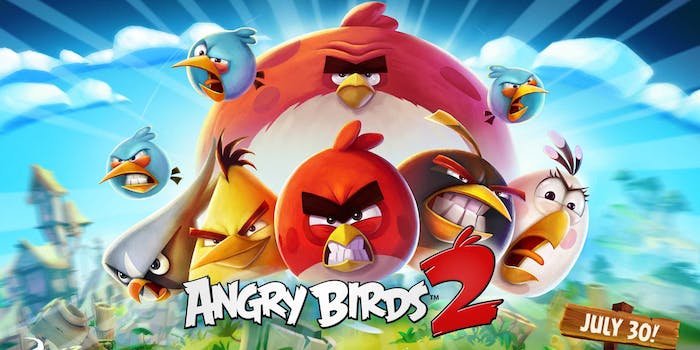 The original smartphone obsession is back.

Before Candy Crush insisted that everyone spam their friends and family with invitations to play, and before Clash of Clans aired Super Bowl ads starring Liam Neeson and Kate Upton, there was one game that extended trips to the bathroom, cost millions of hours of work productivity, and caused commuters to miss their stops: Angry Birds.

Developer Rovio announced Thursday that the OG mobile-gaming obsession was finally getting a proper sequel. July 30, 2015 will mark the release of Angry Birds 2.

If it feels like you’ve played way too many iterations of Angry Birds for the newest title to deserve a “2”—well, you’re not wrong. Although it’s the first official continuation of the story from the original title, the franchise has cranked out 15 games in the Angry Birds universe since the original one was released in 2011.

The birds and their pig counterparts have explored just about every imaginable part of the digital landscape. Angry Birds has been a movie tie-in and a non-canon Star Wars story. It has been turned into a racing game, a competitive game, a roleplaying game, a side-scrolling shooter, and a tile-matching game.

More than any mobile game before or after it, Angry Birds mastered the media angle. It wasn’t solely stuck on the small screens of tablets and smartphones. By capitalizing on the game’s insane popularity—it has reportedly netted more than 3 billion total downloads—Rovio produced a line of merchandise from clothes and toys to soft drinks and tie-in fiction.

There have even been two TV shows, and a movie is set to be released next year. The film has all the fun of watching cutscenes in the game with none of the fun of playing it.

Because mobile games have evolved so quickly—and because we have an incredibly short attention span—the stunning success of Angry Birds seems like it happened long, long ago. It shouldn’t be possible to feel nostalgic for a thing that released a title earlier this year. But if you’ve been caught up in one of the trendier mobile titles that everyone is playing, July 30 will give you an accuse to set it aside and visit a more familiar world. Who knows, you might even be sucked back in.