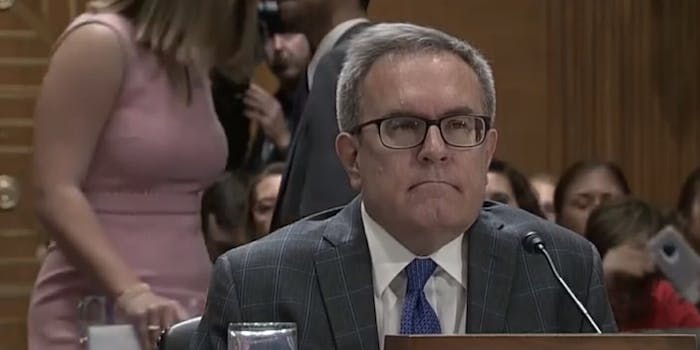 He has numerous questionable likes and retweets.

Andrew Wheeler, the acting administrator for the Environmental Protection Agency (EPA), liked a racist image of former President Barack Obama on Facebook and retweeted a conservative provocateur in the past, according to a new report.

Wheeler liked a photo of Barack Obama and Michelle Obama at a sporting event where a banana is shown in the foreground in January 2013, HuffPost reports. The image was shared by a Facebook page called “Mia mamma e vergine,” which translates to “my mom is a virgin” in Italian.

The news outlet also reports that Wheeler commented on a post by Atheist Republic on Facebook about Hillary Clinton. The now-EPA acting administrator said: “I think she’s mentioned in the Book of Revelations….right after the Four Horsemen.”

The acting EPA administrator told the news outlet he didn’t “remember” liking the racist post about the Obamas, and added that he was a “prolific social media user and liked and inadvertently liked countless social media posts.”