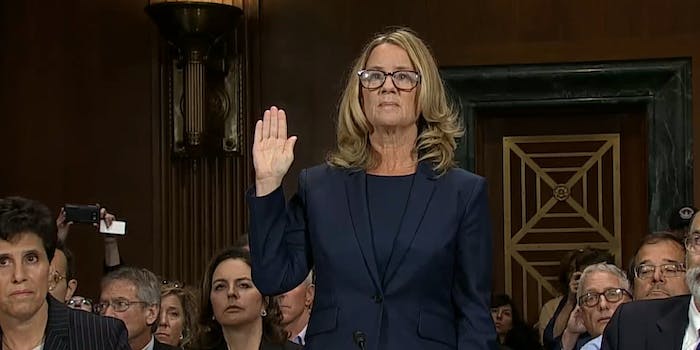 Ford is already a hero regardless of what happens next week.

On Thursday, Dr. Christine Blasey Ford stood before the most powerful people in America, and detailed, in difficult fashion, the story of her being assaulted at age 15 by a man up for a seat on the U.S. Supreme Court.

And while it seemed unlikely, after it occurred, that it would pause the nomination of Brett Kavanaugh (it did eventually, if only for a week), no matter what happens, her words have made a difference in the lives of many.

People online have called Ford a hero, and in the days since her testimony, calls to the National Sexual Assault Hotline have shot up.

The hotline is run by RAINN, the Rape, Abuse, Incest National Network, and is available for survivors to access for counseling and assistance. The hotline usually sees spikes in calls when assault is in the news, but it saw a 147 percent in calls, according to Time Magazine, while Ford testified.

Regardless of whether the now-ordered FBI investigation into whether Kavanaugh assaulted Ford provides enough evidence to prevent a group composed of largely white men from putting him on the highest court in the land, Ford has helped and inspired many women to come forward, something that will have a lasting impact.

If you have experienced sexual assault, you can call the free, confidential National Sexual Assault hotline at 1-800-656-HOPE (4673), or access 24-7 help online by visitinghotline.rainn.org.