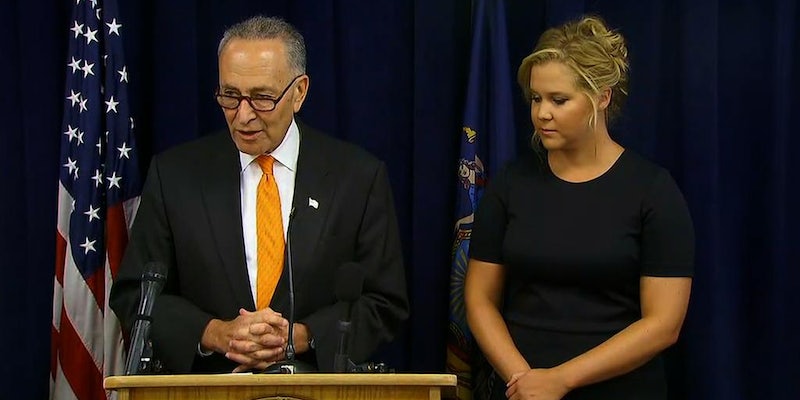 Spurred by the Lafayette theater shooting, the actress and her senator cousin outlined their gun-control plan.

Sen. Chuck Schumer has a plan to “crack down” on mass shootings and gun violence in America, and he’s getting some celebrity help—from comedian Amy Schumer, who also happens to be his cousin.

Sen. Schumer listing the most publicized mass-shootings that have happened this Summer. In Louisiana, Tennessee, SC. pic.twitter.com/ThP7tgMLz2

The New York Democrat’s three-part plan follows a movie-theater shooting in Lafayette, Louisiana, that killed three people, including the gunman, and injured nine. The shooting took place during a screening of Amy Schumer’s movie Trainwreck.

“I’m not sure why this man chose my movie to end these two beautiful lives,” Amy Schumer said during a press conference in Manhattan on Monday. “It’s very personal for me. These shootings have got to stop. I don’t know how else to say it.”

Grateful to @amyschumer for adding her talent & her voice to the nationwide call to put an end to #gunviolence. pic.twitter.com/tJyRdNyinw