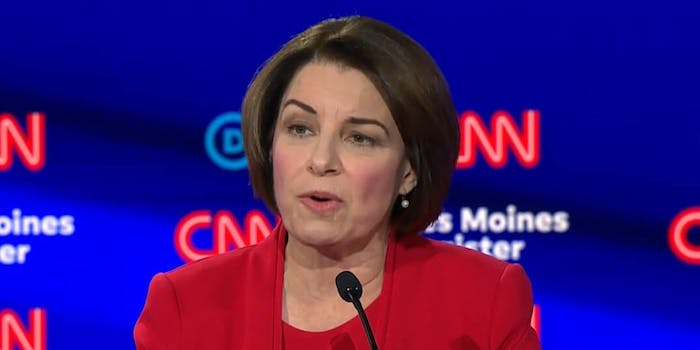 Halfway through Tuesday night’s Democratic debate, after discussing war in the Middle East, trade, and the Sanders-Warren woman president imbroglio, the debate switched to healthcare.

And after Sen. Bernie Sanders (I-Vt.) spoke about Medicare-for-all and discussed tax increases to pay for it, Sen. Amy Klobuchar (D-Minn.), who has been outspoken about the unfeasibility of it, made this comparison about Sanders’ push for universal coverage.

“I was in Vegas the other day,” Klobuchar said, “and someone said to me—they said, ‘don’t put your chips on the wheel—on a number on the wheel that isn’t even on the wheel.’”

In this metaphor, she had to have gone up to a roulette wheel in Vegas, asked to put all her money on 65, and someone had to explain to her that you couldn’t gamble on something that doesn’t exist.

What exactly that has to do with healthcare, well, people were unsure.

AMY KLOBUCHAR: i was in vegas recently, i took a six way parlay, celtics to cover, celtics opening tip, garnet points and rebounds,…

Literally nobody told #Klobuchar to not put money on a number that isn’t on the wheel when she was in Vegas. Nobody. Not a single person. Ever. Knock it off with the fake parables and anecdotes. #DemDebate #DemocraticDebate #CNNDebate

klobuchar: this debate isn't real! i was in las vegas and a man told me this was all a hallucination produced by my dying brain as it released a flood of dmt into my system to fight the terror of nonexistence!

Klobuchar, now that I realize health care access is like going to Vegas and betting on the wheel the number the wheel is on, it's even, well. Yeah. Insulin should totally cost 700 dollars.