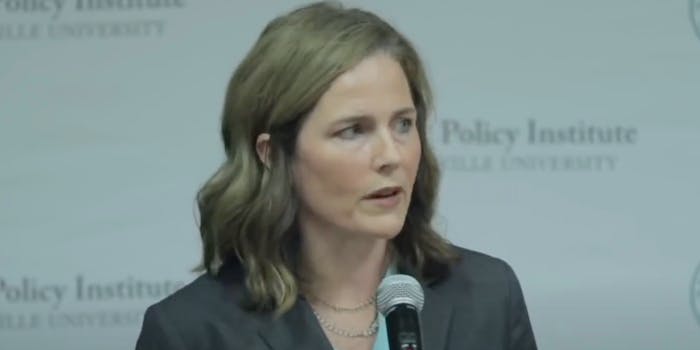 A progressive group snatched the domain up.

Progressive organization Demand Justice bought the website domain AmyConeyBarrett.com and is redirecting it to a webpage scrutinizing the judicial record of Judge Amy Coney Barrett, President Trump’s pick to succeed the late Justice Ruth Bader Ginsburg on the Supreme Court.

On Saturday afternoon, Trump announced his intention to nominate Barrett, a judge on the 7th Circuit Court of Appeals who has been a long-time candidate as Trump’s pick to replace Ginsburg.

The page rebukes Barrett as “someone who could be counted on to overturn Roe v. Wade and end the Affordable Care Act.”

Demand Justice told the Daily Dot it “intend(s) to use the site to educate Americans about Amy Coney Barrett’s track record of supporting striking down the Affordable Care Act and overturning Roe v. Wade.” Demand Justice is a “progressive movement fighting to restore the ideological balance and legitimacy of the federal courts.”

The site asserts Barrett “has repeatedly indicated that she would strike down the Affordable Care Act, ending protections for people with preexisting conditions.”

“She is also one of the favorite judges of people who want to overturn Roe v. Wade, because they know she will be a reliable vote to roll back reproductive freedom. Barrett has also ruled repeatedly for companies that discriminate — including one that employed a ‘separate but equal’ system of sorting employees by race,” it reads.

Within a link to a document lays out her opinions and record, Barrett has challenged the Supreme Court’s ruling in Roe v. Wade, as well as the court’s deference to legal precedent. The document states: “Amy Coney Barrett is a far-right, activist judge whose confirmation would threaten to upend the lives of millions of Americans by ending the Affordable Care Act and ​Roe v. Wade​.”

The webpage also has a fundraising link to organize against the 48-year-old nominee’s confirmation while imploring that confirmation of any justice shouldn’t occur until the next presidential inauguration.