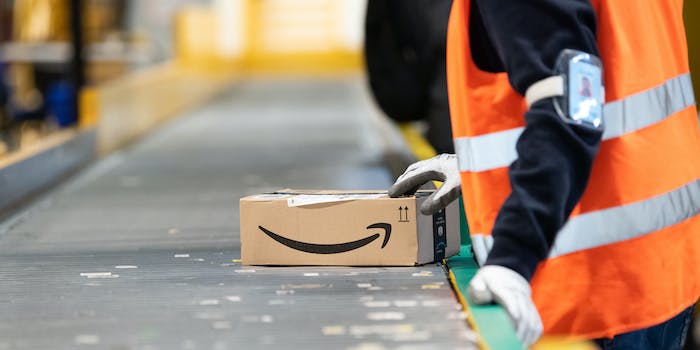 The groups want the government to take action.

More than 35 civil rights, worker rights, racial justice, and anti-surveillance organizations are urging the federal government to crack down on Amazon’s “punitive system of constant surveillance.”

Amazon has faced consistent criticism for its treatment of employees and for the “surveillance empire” it has created with its various products. The retail giant routinely defends itself against such claims.

But the open letter from the more than 35 groups was unveiled to coincide with Amazon’s Prime Day, which has long been criticized for its impact on workers. As Reveal News reported last year, reports of injuries by Amazon employees spike around Prime Day and Cyber Monday.

“Amazon’s punishing system monitors workers’ speed or rate, tracks their movements each second with a metric called time off task, and imposes a constant threat of termination. Amazon claims to simply monitor workflow—but in reality, rate and time off task is used to control physical movements and discipline workers, dictate when or if they can use the bathroom, and has been used to retaliate against worker organizing,” the letter reads.

Specifically, the letter urges lawmakers to enact laws that ban “surveillance-driven discipline and control” like monitoring end rate or off task tracking; update OSHA standards and enforcement to crack down on those practicies; and investigate Amazon “for these widespread and long-standing abuses, including: injuries, retaliation, and discrimination.”

The letter also notes that Amazon’s business model is a “calculated exploitations of workers, the majority of whom are Black and brown.”

The groups signing onto the letter include Athena, the Civil Liberties Defense Center, Color of Change, Fight for the Future, Jobs With Justice, MediaJustice, and many more.

“These punitive forms of workplace surveillance must be banned,” Evan Greer, the director of Fight for the Future, said in a statement. “Congress needs to take immediate action to rein in one of our country’s largest and most abusive employers by passing legislation to end workplace surveillance like Rate/TOT. Our legislators must also hold a hearing to investigate Amazon’s intentionally dangerous treatment of workers.”