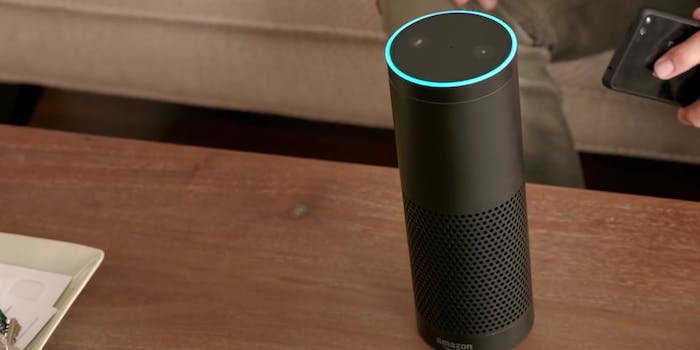 Amazon is throwing money around to make voice-recognition tech awesome

After launching its Echo personal assistant, Amazon focuses on the bigger picture.

Amazon wants to change the way we talk to our gadgets by making them better listeners. On Thursday, the company announced that it would spend up to $100 million funding new initiatives based on voice recognition.

The Alexa Fund, named after the software that makes the company’s new Amazon Echo gadget so good at recognizing speech, “is open to anyone with an innovative idea for how voice technology can improve customers’ lives,” Amazon said in a press release.

The $180 Amazon Echo sold out almost instantly after going on sale Wednesday, owing to rave reviews from participants in the public beta. Reviewers singled out the Echo’s ability, using its Alexa algorithm, to correctly recognize speech across surprising distances. Amazon designed the Echo to fill a need for accurate, always-on voice recognition that even today’s top-of-the-line smartphones can’t always meet.

In addition to launching the Alexa Fund, Amazon also announced APIs for Alexa, called the Alexa Skills Kit, to let third-party developers use Alexa in their services and add capabilities to the algorithm.

The Alexa Fund has already invested in seven projects, including Orange Chef, a startup that links together smart kitchen gadgets and lets people query them by voice. There is also MARA, an exercise assistant that responds to verbal commands, thus replacing the need to interrupt a workout by reaching for one’s device.