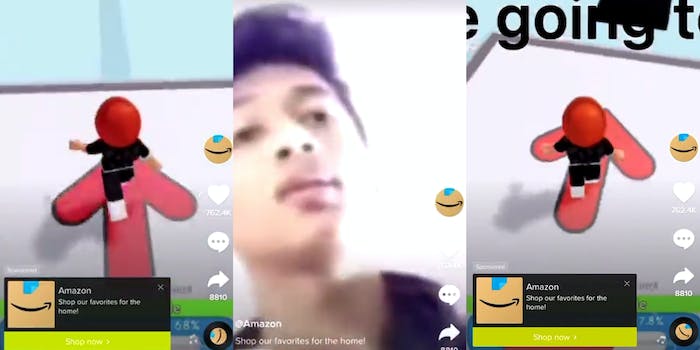 The username and profile picture attached to the ad made it look like it came from Amazon.

Numerous people online have posted screen captures of a bizarre video that purports to be an ad for Amazon that ran on TikTok. However, Amazon says the the video isn’t an official ad.

While it may not be official, it has certainly gone viral—with one tweet showing it getting more than 126,000 views as of Wednesday evening.

“This was an amazon ad I got on tik tok??? this is 100% real I just recorded it,” Twitter user @eddyburback, a YouTuber and streamer, tweeted on Wednesday.

The ad shows a game being played with AI voices talking with each other about a dead grandmother and a girlfriend. Another video cuts into the ad that features a person dancing to the song “Low” by Flo Rida featuring T-Pain several times. The username and profile picture around the ad makes it seem like it is coming from Amazon.

A number of people online shared the ad and were perplexed by it.

Eddy Burback noted that when you click on the ad, it takes you to the Amazon app and searches “revealhome1.” In a screenshot, Burback showed that the search displayed a number of items like a marble cutting board and glass jar canisters.

Amazon told the Daily Dot the ad was not official. The company added that it was looking into the ad with TikTok.

TikTok did not immediately respond to a request for comment by the Daily Dot. We’ll update this story if we hear back.