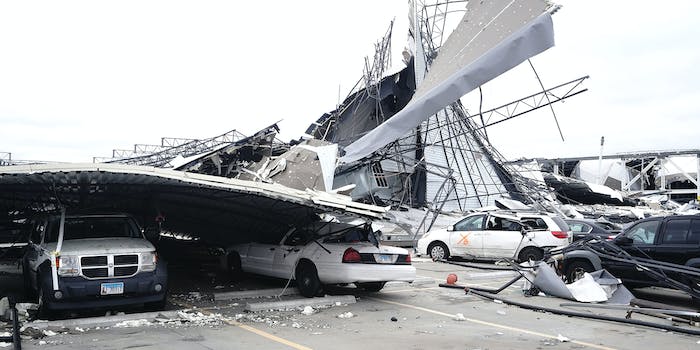 The suit alleges that Amazon 'carelessly' made people continue to work as the tornado got closer.

The family of an Amazon driver who died when a tornado struck one of the company’s warehouse in Illinois late last year has filed a wrongful death lawsuit against the retail giant.

Six workers died at an Amazon warehouse in Edwardsville, Illinois, in December after a tornado struck the facility. On Monday, the family of Austin McEwen, a 26-year-old delivery driver filed a lawsuit in an Illinois state court alleging that Amazon had workers and independent contractors like McEwen working “until moments before the EF-3 tornado obliterated the subject ‘fulfillment center'” in Edwardsville.

The suit continues that Amazon “failed” to evacuate people who were at the fulfillment center; to monitor the path of the tornado and implement safety procedures; to have a basement shelter; and tell people at the center the safest place to shelter.

Amazon “carelessly required individuals including decedent, Austin McEwen, to continue working up until the moments before the tornado struck when Defendant knew or should have known that a tornado was imminent,” the suit reads.

The suit also names Contegra Construction, the warehouse’s developer, and Tristar Properties, a real estate acquirer, as defendants in the suit. The suit seeks $100,000 from Amazon.

“Initial reports from those that survived this avoidable tragedy are disturbing. We certainly intend to discover what precautions Amazon could have taken to save lives. Certainly, this entire facility could have been evacuated when it was believed a tornado was en route. It appears that holiday profits took precedence over safety,” Jack J. Casciato, a partner at Clifford Law Offices, which is representing McEwen’s family, said in a statement. “We need to find out if training and emergency protocols were in place for those in the building as well as those who entered the building with jobs regularly connected to Amazon outside of the facility.”

Amazon defended itself in a statement to the Associated Press.

“This was a new building less than four years old, built in compliance with all applicable building codes, and the local teams were following the weather conditions closely,” Amazon spokeswoman Kelly Nantel told the news outlet. “Severe weather watches are common in this part of the country and, while precautions are taken, are not cause for most businesses to close down. We believe our team did the right thing as soon as a warning was issued.”

Shortly after the tornado struck the facility, six Democrats including Sen. Elizabeth Warren (D-Mass.), Rep. Cori Bush (D-Mo.), and Rep. Alexandria Ocasio-Cortez (D-N.Y.) sent a letter to Amazon executives seeking answers about what happened there and whether the company’s policies “may have contributed to this tragedy.”