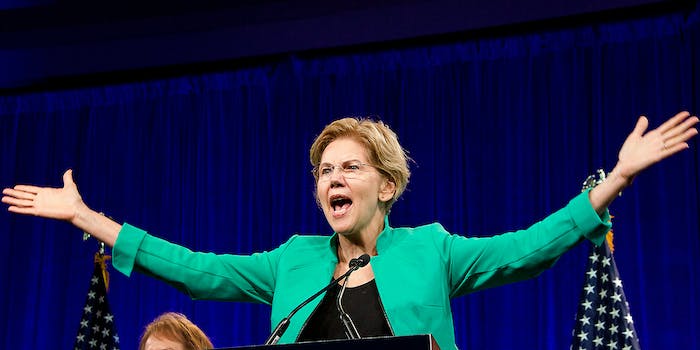 They have a lot of questions for Amazon.

A group of Democrats is asking Amazon whether its policies contributed to the deaths of six workers at a warehouse in Edwardsville, Illinois after a tornado struck the facility.

Sen. Elizabeth Warren (D-Mass.), Rep. Cori Bush (D-Mo.), and Rep. Alexandria Ocasio-Cortez (D-N.Y.) led a group of lawmakers who sent a letter to Amazon CEO Andy Jassy and Amazon founder Jeff Bezos seeking answers about what occurred at the facility and whether the tech giant’s policies “may have contributed to this tragedy.”

Earlier this month, a tornado struck a fulfillment center in Edwardsville. Six people died. Screenshots of text messages from an alleged Amazon worker at the facility to their partner that were shared online said that Amazon would not let workers leave the site during the storm.

“We are writing to express our grave concern regarding Amazon’s anti-worker policies that prioritize profits over worker safety, and appear to have contributed to the tragic deaths of six workers at your Edwardsville, Illinois warehouse,” the letter reads, adding: “We have heard alarming reports about the events that took place in the warehouse moments prior to the tragedy, and these reports fit a larger pattern: Amazon puts worker safety at risk in everyday situations and emergencies alike.”

Specifically, the letter asks Amazon to answer a series of questions, including whether or not the company required workers to stay at the facility during the storm and what safety policies the company had in place.

The lawmakers also asked the company to provide them with documents that show communications from warehouse managers to workers in Edwardsville, a full list of Amazon workers who have died on-site over the past 10 years, and all company emails sent regarding the tragedy.

They requested answers to their questions by Jan. 3.