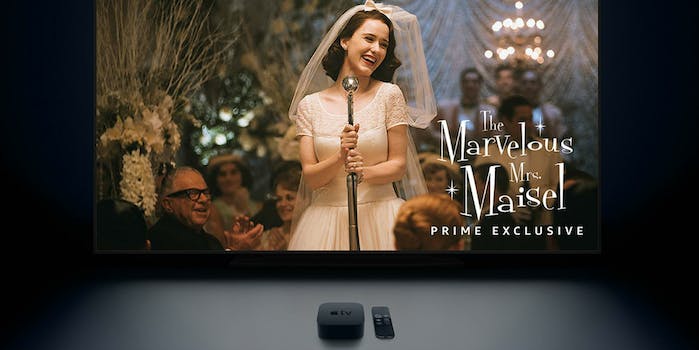 The wait is over: Amazon Prime Video has arrived on Apple TV

Apple customers have patiently waited for the day when they can watch Amazon originals, like The Grand Tour or Transparent, directly from their streaming device. Good news came six months ago when CEO Tim Cook announced Prime Video would be coming to the Apple TV before the end of 2018.

A tvOS (Apple TV’s operating system) version of the video app is available on third-generation Apple TV devices or later, so you should be in the clear if you purchased one in the last five years or so. If the app doesn’t automatically come up, try searching “Amazon Prime Video” in the iTunes search bar.

Previously, Prime Video could only be streamed through an Apple TV across a wireless Airplay connection from another Apple device. Users can now easily access it from a dedicated app right from the home screen of their streaming box. Unlike the Amazon Fire TV, which will lose YouTube on Jan. 1, the Apple TV has all the major video streaming apps, including YouTube, Netflix, Hulu, and now Prime Video.

If the addition of Prime Video to Apple TV weren’t reason enough to celebrate, the Amazon Prime iOS app was just updated to support the iPhone X and its troublesome display notch. Some have already speculated that Amazon will start selling Apple TVs on its site again. CEO Jeff Bezos said he wouldn’t sell the streaming device until Prime Video could be installed.

The vain excuse, which puts little faith in the ability of customers to research products before spending money on them, echoes the warning that sparked a feud with Google, when Amazon said it stopped selling the Chromecast to “avoid customer confusion.”