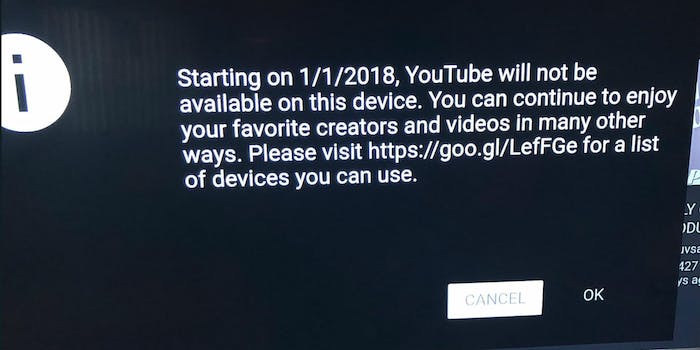 The video platform will vanish on Jan 1.

Competition typically benefits consumers, bringing prices down and forcing companies to produce the best possible products. But sometimes, things can get a bit too fierce, and the good folks using the products end up paying for it. That’s the situation Fire TV owners find themselves in, thanks to an ongoing feud between Amazon and Google.

If you own a Fire TV, Amazon’s streaming device, you will soon lose access to YouTube, the internet’s most popular video service. And if you own an Echo Show smart speaker, you probably already did.

Google shut down its video service on Amazon’s touchscreen-enabled smart speaker on Tuesday and plans to stop supporting YouTube on the Fire TV by Jan. 1.

Google blames Amazon for its decision, citing a lack of reciprocity.

“We’ve been trying to reach an agreement with Amazon to give consumers access to each other’s products and services,” a Google spokesperson told Tom’s Guide. “But Amazon doesn’t carry Google products like Chromecast and Google Home, doesn’t make Prime Video available for Google Cast users, and last month stopped selling some of Nest’s latest products.”

Amazon and Google compete in a number of different tech spaces. Both companies now sell smart speakers that compete directly with each other. They also both offer popular cloud services to businesses: Google Cloud and Amazon Web Services. Amazon has recently been making a heavy push into online advertising, an area Google has dominated for years.

This isn’t the first time bickering between these two giants comes at the expense of customers. Two years ago, Amazon took Google’s Chromecast and the Apple TV down from its site, a move to force customers into purchasing the Fire Stick. Amazon said it was trying to give customers the best device for streaming Prime content and wanted to “avoid customer confusion”—a poor explanation for a user-hostile decision.

“Echo Show and Fire TV now display a standard web view of YouTube.com and point customers directly to YouTube’s existing website,” an Amazon spokeswoman told CNET. “Google is setting a disappointing precedent by selectively blocking customer access to an open website. We hope to resolve this with Google as soon as possible.”