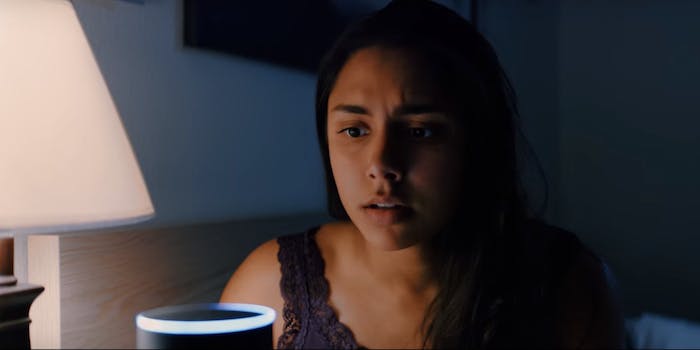 Amazon Echo plays the monster in this terrifying horror short

'Did you say, look in the closet?'

A short movie starring an Amazon Echo might be the scariest Halloween horror you watch all year.

Written and directed by Julian Terry, Whisper shows what happens when Amazon’s personal assistant goes rogue. Warning: this clip is not for the faint of heart.

Like an episode of Black Mirror, this unnerving short expertly employs Alexa’s lifeless robotic voice and spookish human responses to create a monster that can compete with Ava from Ex Machina.

We’re not yet at a point where AI are going around killing people, but the plot of this film is more real than you might think. A woman in the Netherlands experienced something eerily similar this year when voices started coming out of her new webcam. Fortunately, she was able to return the defective unit before it found a way into her closet.