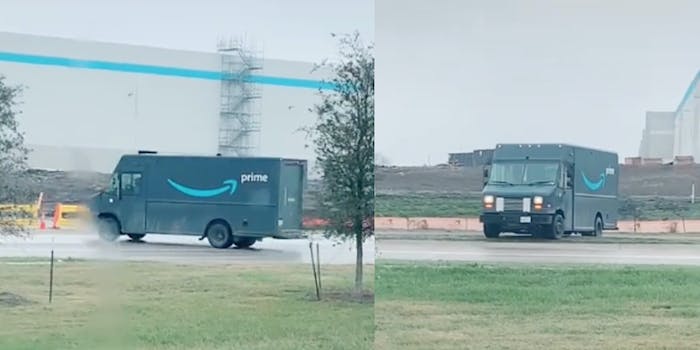 ‘My package could have waited’: People are pissed after seeing TikTok of Amazon driver skidding on ice

'I can wait. What I ordered is not that important.'

A viral TikTok video is sparking debate about the tradeoff between worker safety and customer convenience after an Amazon driver was seen skidding on an icy road.

The footage, filmed in Northern Texas, shows the driver struggling to control his vehicle due to wintery conditions.

“Homie couldn’t even make it but 10ft out the drive lanes…” TikTok user @OlyCook wrote.

While the video is presented in a humorous manner, other TikTok users are questioning in the comments whether quickly receiving a package is worth the cost of endangering Amazon employees.

Others noted that the footage, which has been seen more than 3.3 million times so far, should be taken seriously given that at least six people died in a 133-car pileup due to icy roads in Northern Texas on Thursday.

“My package could have waited,” @aguadulce777 said. “No need for this right now after seeing tragedy in Fort Worth.”

Another user claiming to be an Amazon driver expressed gratitude after she says her routes were canceled due to adverse weather.

“I drive these Amazon vehicles and I am so THANKFUL my boss canceled the routes for today,” @marianeeray added.

Amazon has long been accused of placing profits above the wellbeing of its workers, whether in its sorting facilities or on the road.

While the company has undoubtedly helped millions with its fast delivery, especially during the coronavirus pandemic, it may have come at the cost of shuttering retail shops across America and Amazon workers’ wellbeing.

“I can wait,” @briaanicolee16 said. “What I ordered is not that important. Please stay safe out here fellow Texans.”