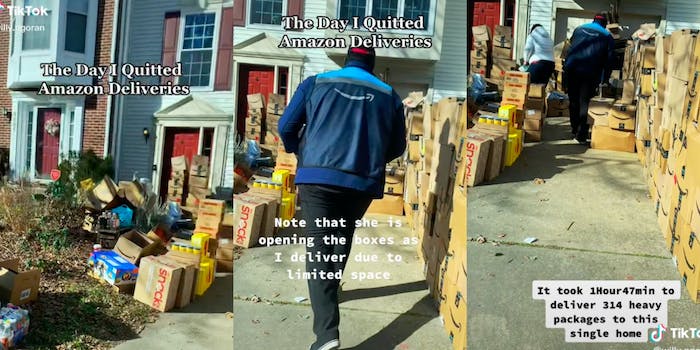 A TikTok video showing an Amazon worker unloading seemingly more than 100 packages on a customer’s front lawn has gone viral.

“The day I quit Amazon deliveries,” the text overlay and text-to-speech effect on the video note.

“Note that she is opening boxes as I deliver due to limited space,” the text in the video reads. “It took one hour and 47 minutes to deliver 314 heavy packages to this single home.”

The shocking amount of deliveries was surprising to viewers, who hypothesized why someone would receive that many deliveries. But the TikTok creator, @willy.ngoran, clarified that there was “an error in the system that delayed the deliveries.” He added, “They were to be split between different drivers but it went wrong. I was the last resort.”

@willy.ngoran told the Daily Dot that while he still works at Amazon, he is now a dispatcher rather than a delivery driver. He said one of the reasons he posted the video was “to show people what they ignore about the delicate job, as far as un amount of packages and effort drivers sometimes showcase to make these last mile deliveries possible.”

“It is true that we get a lot of packages some days but it’s mostly the apartments that make people quit,” he added.

He said he “was very amazed” by the support he received after posting the video.

But on the flip side, he said, “There was also a lot of ignorance and selfishness displayed in the comments, of course it’s 2021. But It inspired me to show more of the underlying process in the upcoming videos i plan to release.”

Amazon delivery workers have also been vocal about the unsafe and unsanitary working conditions they’ve been allegedly forced to work in. The Guardian published an explosive article in March about Amazon delivery drivers allegedly regularly working 14-hour days with no bathroom breaks and allegedly being forced to urinate in plastic water bottles.

“I saw no effort on Amazon’s part to push delivery service providers to allow their drivers to use the restroom on a normal human basis, leading many, myself included, to urinate inside bottles for fear of slowing down our delivery rates,” James Meyer, a delivery worker for Amazon, told the Guardian.

“Any time a van is off route or stops for longer than three minutes, it notifies the delivery service provider,” Meyers continued. “Amazon encourages the delivery service owners to cut down on said stops. I would personally get called by a dispatcher every time I stopped to go to the bathroom. Sitting on the phone with them made the stop take longer. It just wasn’t worth the angry looks in the morning or the worry I’d get fired.”

The Daily Dot reached out to @willy.ngoran.